I think I’m now roughly on the same line of latitude as the bottom of Iceland, having pedalled nearly 1000 miles from the Northernmost point of Europe in 2 weeks; no wonder my legs are aching tonight. Nordkapp seems like quite a long time ago, and the scenery has certainly changed. The frozen lakes and snow have given way to pine forest, and clear blue water glittering in the sunshine.

Sunshine on the lake at Mosjon Camping

I was chatting to the campsite owner this evening and he reminded me that I’m still in northern Sweden really, having pedalled to the Snibbens Campsite near Ramvik; Harnosand is the nearest big town. This country really is very long! I think I’m only about 300 miles from Stockholm, depending on to what degree I avoid the E04, so definitely getting there.

Here’s a link to today’s ride; 120km down the High Coast, which lived up to its name as far as hills go:

It took me 7.5hrs of pedalling, with climbs totalling 1,355 metres; this could again be why my legs, and especially my knees for some reason, are aching. And my hands, did I mention my hands? And my arms. In fact most things.

It rained overnight, quite hard. You hear these things in a tent, in fact you can hear anything and everything in the immediate vicinity pretty well. There was one particular bird that didn’t shut up all night, flying around the lake tweeting constantly; not tweeting as in Twitter, but twittering as in squawking, if you see what I mean, or hear what I’m saying, or something. It didn’t keep me awake long but it was definitely a flying varmint! I was consequently a bit slow setting off this morning, not leaving until getting on for 10.00.

I initially joined the E04, having little choice in the matter, and rode to Ornskaldsvic, a medium sized pleasant town.

Ornskaldvic, looking at it from the South

On the way in I almost literally bumped into another cycle tourer, Tomak (sp?) from Germany, who has cycled up from near Hamburg, and intends to travel around the whole Baltic coastline before returning home. He mentioned Estonia, somewhere quite a few cycle tourers have spoken about lately; sounds like a place to add to the list to visit. We both took a break to exchange tips on the routes ahead. Tomak told me he’s been following the black cycle route signs, which I’ve only seen a few of so far, but apparently get more frequent. These take you on routes that avoid the busy main roads, like the E04, but add on a lot of kilometres as a consequence; so more pleasant riding but will add on a lot of time. It was good to meet another tourer; we’re a scarce breed up here at this time of year. We wished each other luck before pedalling off in opposite directions.

Leaving Ornskaldsvik I passed a rather incongruous sight; the Bishops Arms, down by the docks, maybe pubs will be increasing in frequency now. If so beer could be back on the menu; abstinence is over-rated. 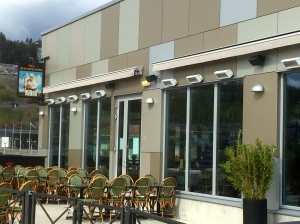 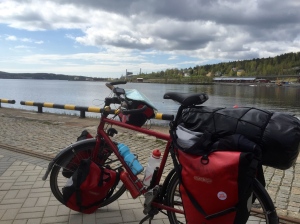 I left the E04 after Ornskaldsvik, taking quieter roads for a bit. In fact I reckon I spent at least 50% of today’s ride off E04, which although introduced more hills and distance, was a welcome relief. I saw this sign riding up out of the town; not sure what it was about.

The side roads are so much quieter, and the scenery was lovely to cycle through, if a little taxing on the legs.

Pausing to admire the view near Ornskaldsvik

I compensated for tired legs by eating lots of Haribos. These were a staple on my Bike around Britain tour, and I’m pleased to report they sell them in even more varieties in Europe; great for topping up your energy levels.

Ski slope without the snow

As I cycled along winding roads, up and down hills, passing lakes and glimpses of the Baltic, I saw much wildlife. A fox regarded me suspiciously as I rode past, before dashing into the undergrowth. I can also report Sweden has hedgehogs and badgers, although I only know this because I’ve seen them squashed on the road, sadly.

The Hoga Kusten (High Coast) has lots of interesting places that would be good to come back and  visit over a few days. There’s a centre in the park in the above picture, where you can climb a Via Ferrata; I haven’t done one of those in years, and would love to again. I might see if I can do a bit of climbing when I get down to southern France, where I hope to visit a few old friends from when I lived in Marseille.

Blue waters of the Hoga Kusten

Back on the nature front; I saw some of those Emus again, although I’m not pretty sure they’re not Emus but White Storks. They’re really big, and a couple flew off as I rode by – enormous wingspan. I spotted a Swallow too, or it might have been a House Martin. Now I’m cycling a long way, however these birds can give me a run for my money, migrating over 10,000km from Africa.

Break by a lake, more Haribo power required for hills

Here are a few more photos from my ride along the back roads away from the E04.

Hoga Kusten – many lakes to be found

Road continues away from the E04, nice break

Sadly no beavers to report; I kept an eye out for them as they’re supposed to live in these parts, but they must of all been hiding from Lobster.

The alternative route meant I covered more kilometres than I expected to. One advantage of the E04 is it does get you down the coast quickly, relatively speaking, but you can miss a lot if you stay on it all the time. Saying that several of the sections I rode on today were quite nice, with a wide hard shoulder; it’s just the constant lorries which get annoying, and their buffeting.

I passed under the E04 and pedalled up to a town called Klockestrand, then crossed the high bridge over the River Angerman; think that’s what it’s called. It’s a really wide river, and it was a long way down from the bridge.

There were actually two bridges to get over this river, the second being a bit further on over another section of it, and even higher. The campsite owner later told me this is the old bridge, and there’s a newer one on the E04 you can cycle over, but there’s no cycle path so you take your life into your own hands; glad I went the way I did.

Made it over both bridges, phew, and first day I haven’t had to wear a coat!

Feeling tired I stopped at a service station for a hot dog, and bought some Pringles for extra calories, before completing the final stretch down to a campsite near Ramvik – Snibbens campsite. The owner was out walking his dog as I pedalled down to reception; the 2 year old labrador greeted me enthusiastically, finally a dog that doesn’t bark at cyclists.

I can recommend Snibbens campsite. It’s a lovely peaceful spot, next to a lake, with friendly owners who live on site. I had a great chat with the owner about my ride, and about northern Sweden. One of the things he mentioned shows how people have the same concerns all across northern Europe; immigration. On my cycle down I’ve been noticing a lot of people begging outside shops, on the street and probably living rough. He said that this is a relatively new thing, only having started in the last few years as more people move to Sweden from eastern Europe and beyond. We both agreed it’s a sad thing to see so many people living rough, probably having come here seeking a better life, or escaping something worse at home. It would be good to do more to help them, but it would be better perhaps if the problem could be fixed at source, so people don’t feel they have no alternative but to move to wealthier countries, and then find themselves homeless and penniless. It will be interesting to see how this varies as I progress through Europe; I know it’s the same in France.

Being the only camper on site I had use of the communal room to myself for the evening – a chance to chill out after a hard day’s ride, and look at my maps. I need to work out where I’m going after Stockholm, and how to get over into Denmark.

Double thumbs up to a hard won day

Off to just South of Sundsvall tomorrow, if all goes according to plan. Hopefully I’ll be in Stockholm Sunday or Monday.