Since Hamburg I’ve been pedalling for 3 days, so a bit of a blog catch-up is in order. I’ll cover the 08 and 09 May on this post, and might get to today’s ride later, if not tomorrow; in Holland now, where cycling is just a pleasure.

Here are links to the routes and stats from the last couple of days:

–> 08 May 2015
I was frankly surprised not to have a hangover after a very good night out in Hamburg, however I’ve noticed before that a lot of cycling tends to reduce the severity of hangovers, plus I probably don’t drink as much as it goes to my head more quickly after all the pedalling.

First order of the day was to find a bike shop to get some replacement inner tubes, just in case. Reception pointed me in the direction of a few local to St Pauli, and whilst I couldn’t find any tubes that were exactly the right size, I bought a couple that will do the job, should the need arise. Again most inner tubes in Europe seem to use Presta valves, however I found one in one shop with a Schrader valve, and another in another shop that was Presta; my pump will work with both so think we’re good. I got my stand tightened up too, however I don’t think I’d better use it as the metal has fatigued where it joins on to the bike, and will eventually break; not structurally integral to the frame but annoying none the less. I might get a replacement stand fitted to another part of the bike, or use the forked stick trick; not vital in any case.

One other addition to the bike; added a St Pauli Jolly Roger sticker, their unofficial logo, to my panniers. I need to remember to get more stickers to add on my travels. 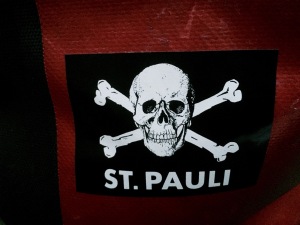 I’ll have to start thinking about getting Smaug serviced soon, and maybe a new chain and rear cassette, but I’m loathed to change anything whilst it’s all working. Will get the chain checked for stretch anyway.

Once back at the hostel I packed up and said goodbye to Alex, before hitting the road towards Bremen. 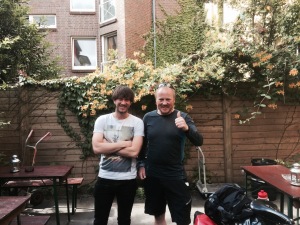 Preparing to leave Hamburg – with Alex, my compadre from last night

Alex was flying back to London later that day; weird to think the flight takes 1 hour, whereas it’ll take me another 5 months, admittedly via a rather roundabout route.

The rest of the day was fairly straightforward riding. I pedalled North West out of St Pauli, alongside the River Elbe, chatting to a few random people along the way (friendly place Hamburg), and got the ferry over to Neuen. You don’t quite realise how big Hamburg port is until you see it – goes on for ages. 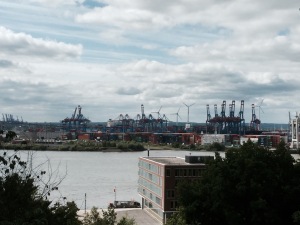 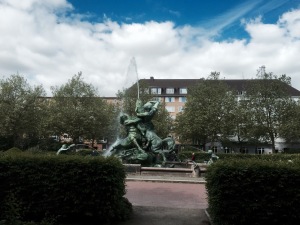 On the ferry I ended up speaking to a man who is finishing his job in a week, and going hiking in the Alps for 7 months; amazing who you randomly bump into. 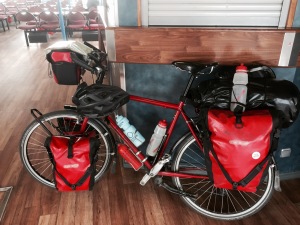 Then it was a case of skirting around the airport and heading South to Bremen, albeit it via a rather ‘scenic’ route. 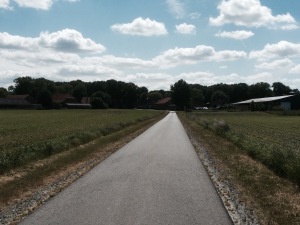 ALERT – this post is being temporarily taken over by the CCFC – Crustacean Committee for Corrections. So, Lobster here, we did not take the ‘scenic’ route, the human pedalling the bike, known as James, went the wrong way because he wasn’t paying attention to sign posts. What a dufus. Probably added 20km on to the day’s ride, and meant we nearly ran out of chocolate, which would have been a crisis not worth thinking about. I had to take over the navigation for the rest of the ride; it was quite boring, apart from the cows who are funny, and the bit where James got sprayed with water from a farmer’s irrigation spraying device thingy; that was very funny. Luckily I have a carapace and am not averse to water, unless it’s hot, so it didn’t bother me. 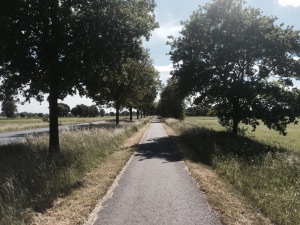 Through the countryside to Bremen

Ahem, yeah okay, we might’ve gone the wrong way for a bit, but it wasn’t that big a detour, and we had an emergency McDonalds when we got to the outskirts of Bremen to make up for it; they accepted MasterCard, which was handy as I was running out of cash. It’s really quite tricky to find a cashpoint that accepts anything other than Eurocard/Maestro in Germany. 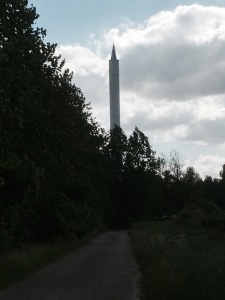 Wizards Tower on the outskirts of Hamburg

I found the campsite relatively easily – Stadtwaldsee, on the outskirts of the city, and unfortunately right next to the motorway so it was a bit noisy. 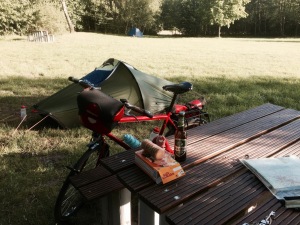 I had enough cash for the campsite, but not for the restaurant, which also didn’t accept MasterCard, so instead ate some biscuits and had a relatively early night. Tomorrow I’d find an ATM and get out a decent amount of cash so I don’t run short again. There were quite a few other tourers at the campsite, including a couple of French guys heading North; more and more cycle tourers as I head South. 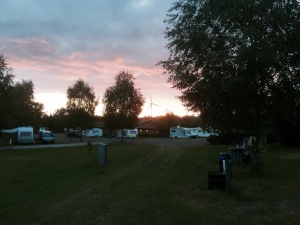 –> 09 May 2015
Today wasn’t an amazingly exciting day, but I covered a good distance and it was good to see Bremen, even if I did spend most of my time looking for an ATM that would accept MasterCard or VISA. 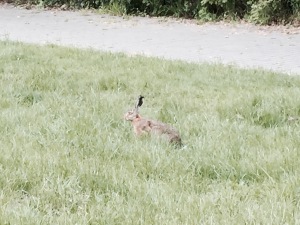 Visit from a Hare in Stadtwaldsee 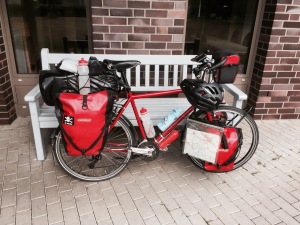 Smaug ready for another day on the road

I headed into Bremen on cycle paths, taking care to avoid the trams, as well as tram lines which can be lethal if you get your wheel caught in them. I went straight to the historic Market Square, where the World Heritage listed town hall (Rathaus) can be found. I glanced at it then found the Tourist Information office who were able to point me in the direction of a couple of banks that would accept my cards; ended up at a Santander and withdrew some Euros – a big relief, and I can buy food now! I could also use the free wifi at the Tourist Info office to check my route for the day, and my emails etc, very handy, and meant I was able to check-in and get spotted on the Bremen marketplace web cam. 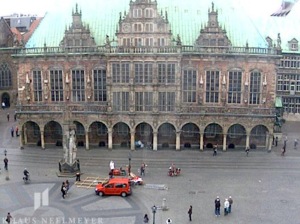 Bremen has a lot of older buildings, compared with Hamburg; here are a few photos from taken on my meanderings.

Bremen – think this was a hotel

Thumbs up to finding a cashpoint that works

Bremen Marketplace – not sure who this is

Somewhat relieved to not be penniless still, I made my way over the river and cycled to Delmenhorst, passing a ship called the Admiral Nelson on the river – probably a restaurant by the looks of it. 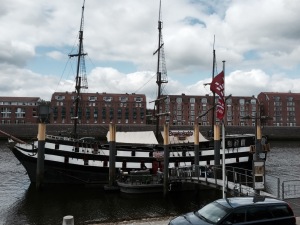 I was paying particular attention to signposts, so as not to take any unplanned detours, and to avoid a Lobster takeover again. It doesn’t help when the signs are missing from the posts, however a combination of maps and my Garmin saw me out of the city and suburbs, and into the countryside. 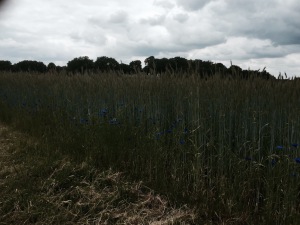 Fields of Barley with cornflowers

The roads took me through fields of Barley, where cornflowers added a vibrant purple colour to the landscape. There were cows too, much to Lobster’s delight; I don’t know why he likes them so much.

At one point I opted to risk it and continue down a cycle path next to a road that was allegedly closed. It turned out fine, just like the other day – the road was being resurfaced but the path was open still. They don’t do things by halves in Germany; if the road needs mending they close the whole thing and get it done quick. 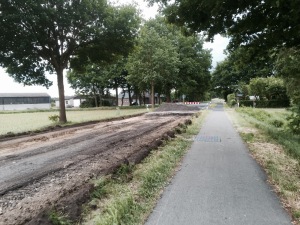 The route to Werlte, my destination for the night, was easy-going and well signposted, with the next village on my map always having a handy sign to point me in the right direction. There were no hills to speak of either, so despite the 112km it felt like an easy day. My only complaint is that some of the cycle paths can get unexpectedly bumpy at times. Tree roots growing under the tarmac can ambush you, and are a little jarring to say the least. It doesn’t help that I’m a bit paranoid about my wheels, both spokes and punctures, so am constantly checking them.

Before checking in at the campsite I did a shopping run to Lidyl, and probably bought too much now I’ve got some money, however I’m sure it’ll all get eaten. 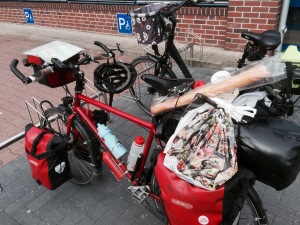 There were some interesting garden ornaments in a nearby garden centre; these are just a few of them.

German garden ornaments, not quite gnomes, but purple sheep are, urr, interesting

I don’t think I can fit anything like the above in my panniers, so friends and relatives are probably safe, this time around.

The Humminglingerland/Werlte Campingplatz is a great campsite, and I’d arrived in good time; it was cheap at €6.50, and has free wifi. There’s no restaurant, but I didn’t need one tonight, and it’s lovely and quiet so I was just able to chill out for a while in the sunshine, enjoy a mug of wine and the birds singing; je suis tres sophistique, non? 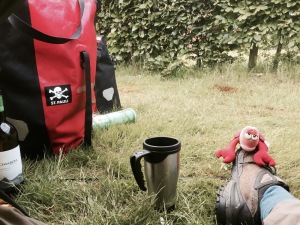 I had some radishes too, so getting my 5-a-day, or thereabouts. 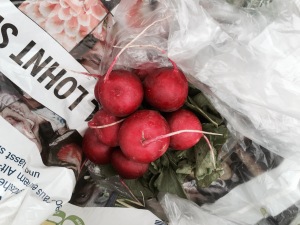 A bit of planning saw me work out my route to the Netherlands, however I’m still undecided on whether to visit Amsterdam or not; going towards ‘not’ at the moment, as it could just be a lot of hassle with my bike. I’ll make up my mind tomorrow, and try and work out where I’ll be around my  birthday for the purpose of family visitations; looking forward to that!