With holiday to use up, mainly due to poor planning on my part, I visited relatives in Derbyshire last week and had the chance for a wander through Dovedale, in the Peak District.

The River Dove – tad chilly for a dip

River was quite high last week; lots of debris

Dovedale, not far from Ashbourne, is a fantastic limestone gorge where you can walk alongside the river up to Milldale, or take various other paths to surrounding villages and other interesting spots. I haven’t been there since I was a kid, and remember crossing the stepping-stones with some trepidation the first time around. This time one of the stepping-stones had slipped downriver, so a less hazardous but rather boring bridge crossing was required.

Lots of caves about

The path to Milldale winds alongside the river, and is relatively flat with only a few ups and downs. There are lots of caves to explore should you have the urge; I don’t know the history of the area very well however one can imagine people must have lived in them for thousands of years. I liked Reynard’s Cave, although it seems a little big for foxes.

Travelling Lobster on a bridge near Ilam’s Rock

Only the occasional climb alongside the river

It was a bit of a dull day, but that really didn’t matter and probably meant it was a lot quieter than in the height of the tourist season, making for a very peaceful walk. I spotted quite a few dippers flitting about on the river, a few wrens and an inquisitive robin, and a yellow wagtale.

I passed various funky geological features including Ilam’s Rock, which I forgot to take a picture of as Lobster wanted his picture taken on the bridge, the 12 Apostles rocks, the Lion’s Head rock, the Dove Holes, all worth exploring more and it looks like a great climbing area too.

Listen to the river

Entrance to Dovedale from the North

I’ve been watching a few of the old films we made for It’s A Trap recently, and couldn’t help thinking the area would make a wonderful location for some filming, probably involving Orcs or something; bit of a Tolkien landscape really.

Light playing on the river

Made it to Milldale

After about 3 miles I reached Milldale, encountering only a handful of other walkers on the way. It’s a good spot for some lunch, although I did get swarmed by Mallards and one bit my finger; worse than piranhas!

I always think Mallards sound like they’re laughing at you. These were some of the boldest ducks I’ve ever encountered, even stooping to plunge their beaks into my rucksack in search of sandwiches whilst my back was turned; Lobster was no help whatsoever incidentally.

Mallard 2, trying to look all innocent

Viator’s Bridge from Milldale side

There’s a lovely poem on the information boards in Milldale, written by an eleven year old in 2003. I think it captures the spirit of the dale perfectly.

MAGICAL DOVEDALE
The water chuckles and giggles over weirs,
Then the bobbing dipper disappears.
The wrens and goldcrest dart along the riverside,
Above the spires the clouds do glide.
Ilan Rock looks down on Pickering Tor,
While mosses and ferns creep over the floor.
Across the Stepping Stones we tread,
Look! That Rock shaped like a lion’s head.
The ducks dip under, just showing a tail,
And this is my magical spirit of Dovedale.

I wonder what the hole in the rock is up there…goblin spy hole?

After lunch I wandered back down the gorge, passing a few logs studded with old coins, where people must have made wishes. I stopped and added my own.

Back at the stepping-stones – view of Thorpe Cloud

Top of Thorpe Cloud, looking back up Dovedale

At the entrance to Dovedale stands Thorpe Cloud, an isolated limestone hill rising some 287m above sea level. Again I hadn’t been up it since I was a kid, so proceeded to clamber the grassy path, being careful not to slip down the steep slopes as one of my aunts did as a child, breaking bones apparently. In fact quite a few of my relatives seem to have accidents of one sort or another here, mainly involving the stepping-stones; I’m wondering if there was sherry involved.

The sheep have kept this landscape devoid of all but grass

A steep descent, think I’ll go the other way

Nothing like a good walk in beautiful countryside, maybe involving a few hills, to bring a little perspective and peace. Back at work now, but at least the morning cycle ride takes in some countryside; looking good in the frost. 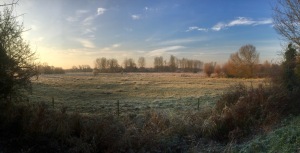 Only a couple of weeks until Christmas holiday starts!