Okay, today was a bit crap, until the evening bit anyway. It started off alright, with no sign of rain, and a successful fix of the puncture in my front tyre, then I headed into town for 09.00 to see about getting my broken spoke fixed; tip of iceberg springs to mind.

Morning at Koge campsite – dry at the moment

Unfortunately I discovered the bike shop I’d pinpointed last night doesn’t open until 10.00, so in a fit efficiency I whizzed back to the campsite and packed up my stuff, so I could get straight on the road after maintenance was completed.

I liked this big Oak Tree

About 6 kilometres later I was back at the bike shop and checked-in Smaug, or at least his wheels, for a bit of TLC. The bike shop owner recommended a local cafe whilst he performed an initial diagnosis, so I headed there for my own bit of maintenance.

Smaug undergoing maintenance, so I thought I would too

The cafe did a very good Danish pastry and hot chocolate, and feeling things were moving in the right direction I ambled back to Garant Cykler to get on the road. It started to rain; not to worry I thought, it’ll only be a shower, the forecast said overcast but dry all afternoon. Hah!

The bike shop didn’t have the greatest news on Smaug’s wellbeing. Unfortunately the spoke issue was not contained to just one spoke. A few days ago the chain had slipped off the top rear cog, and had slid down in between the rear cassette and spokes. I’d extracted it but unbeknownst to me at the time, it had chewed up several of the spokes on the drive side. This meant they were also in danger of snapping and needed replacing. You can’t see this sort of damage unless you remove the rear cassette, which I don’t have the tool for. Thankfully the owner is also a proficient wheel builder, and did a great job of replacing the dodgy spokes and truing the wheel, despite being stacked up with other work. It took him quite a long time and one broken set of clippers to remove the compromised spokes, which due to being chewed up didn’t fit back through the spoke holes very well; tricky. Whilst he was doing this I mended the punctured inner tube I’d kept, for future use.

If you’re familiar with my Bike around Britain tour in 2013 you’ll perhaps know I had a lot of trouble with my back wheel and broken spokes then. It seems to be a feature of cycle touring, with so much weight on the bike, however hand-built wheel help with this, and I’d hoped having 26 inch wheels, which are stronger than their larger counterparts, would also assist in preventing issues. So I had a feeling of ‘oh no, not again’ building, with not a small amount of dread. I was therefore extremely happy when the owner presented me with the fixed wheel to put back on Smaug, and we then adjusted the gears to stop the chain slipping off again; I reckon  the shifters got moved slightly out of alignment during the plane flight to Nordkapp, as I’d noticed a few things knocked out of kilter and tried to move them back into place.

I was also going to pick up a couple of new inner tubes, just in case, however it appears Schrader valves are pretty rare in Denmark, where they go for Presta more. I’ll just have to fix any punctures I get before buying some new ones in Germany. I’ve still got one spare, even after another one blew up in the bike shop due to a weak spot. I bought up a couple of new tyre levers after breaking one this morning; getting Schwalbe Marathon Plus tyres on and off is hard work, and I’m not the best bike mechanic you’ve ever met, very amateur really.

Just realised my pump will fit either Schrader or Presta valves; reversible hose. So I could get Presta valve inner tubes.

If you’re cycle touring and pass through Koge, I’d recommend Garant Cykler if you need anything fixing or tweaking; good skills and really helpful. I really appreciated their assistance, and don’t know what I’d have done if the breakage had happened somewhere more remote; I’d have no doubt coped, and improvised something, but it would have been a much more painful experience.

I eventually got back on the road and started pedalling South, in the rain, at about 12.30, so quite a bit behind schedule for the day but not too worry, these things happen. It was wet and windy all the way to Vordingbord, so not a lot to report other than rain, spray, wind, and crankiness. I did get another puncture in my front tyre, which I fixed, however I’m developing a suspicion that the replacement Schwalbe tubes I’ve got aren’t as tough as the original Continental tourers I had on. 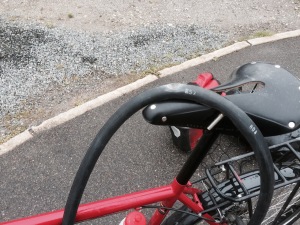 D’oh – yet another puncture

My no puncture stat from the other day definitely jinxed my run good luck on the wheel/tyre front, however hopefully that’ll be the last of them for a while; I don’t know why I say these things! 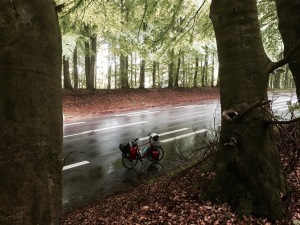 Break from the rain en-route to Vordingborg

For a while my morale really dipped on the ride down to Vordingbord. It was only 60km, but the incessant rain, coupled with the driving wind, really grinds you down after a while.  After a break I enforced a change of mental state on myself, accepting the weather, putting a big smile on my face, and belting out a few songs; American Pie always a favourite. It always seems to work, you can either gradually spiral down to a meltdown, or pick yourself up and think positive. The weather certainly hadn’t got any better but my morale suddenly improved, although I probably confused a few people in the towns I passed through by smiling at waving at them.

Vordingbord achieved I decided that was far enough for the day, and checked-in to the Ore Strand campsite, still smiling; insanity can’t be ruled out.

It’s a great little campsite, right next to the beach, with a good kitchen area I could sit in to get out of the wind; thankfully the rain had stopped. I nipped to Lidyl once I was set up, to resupply, then settled in for the evening, munching my way through a lot of pasta, salad, and snacks, as well as a glass of wine or two for medicinal purposes.

I took a wander down to the beach, just to stretch my muscles after the short but arduous ride; bit damp but would be nice when the sun shines.

There was meeting of the Ore Strand beach committee in the kitchen building that evening, which I kinda inadvertently gate-crashed by being there at the same time. I chatted to several of the locals, and got given a Danish pastry to top up my energy reserves; a good result. Really lovely people, interested in what I was doing, and they recommended I take the island hopping route rather that getting the ferry straight over to Germany, so I think I’ll do that.

Link to today’s route and stats, shortest leg for a while at 58km in about 3.5 hours:

The weather forecast doesn’t look great for tomorrow. It’s supposed to improve later in the week, so finger’s crossed. However, if one more person in Scandinavia shrugs and says ‘that’s Danish weather for you’, or insert Sweden or Norway to that statement, there may be violence. I’ve heard that in every country I’ve been through, including the UK, in response to changing weather and it not matching the forecast!

News just in; I’m in Svendborg tonight typing this up, and the campsite owner just told me there’s been 2m of snow in parts of Norway, which is really unusual for this time of year. The bad weather is supposed to continue for the next few days, so I’m glad I’m not there now, and hope no other cycle tourers are stuck in it.