Scandinavia and Nordkapp seem like quite a long time ago now, but they aren’t really, it just appears that way when you’re filling each day with new sights, sounds and experiences, and lots of pedalling. If I’d been at work for a month and a half instead I’m sure I find it difficult to distinguish one day from the next; on balance this is much better, however one does of course fund the other!

Nordkapp did look and feel a bit different though… 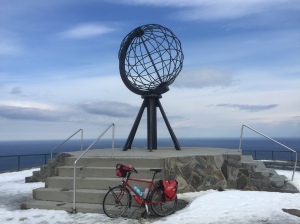 Nordkapp – Smaug made it – that’s the name of my bike, from Oxford Bike Works

Here are my routes and stats for the 17 & 18 June, which took me to Paris and then on to a little town and campsite South of Fontainebleau, where I’m having a day off; very pleasant it is too.

–> 17 June
Today was mostly about getting to Paris, where I thought I might spend a couple of days, however I changed my plans once I got there; great place to visit but expensive and noisy. I covered 123km in about 8 hours, so a long day, but worth it.

I left Vic-sur-Aisne pretty early, riding up to Attichy and Berneuit-sur-Aisne thinking about how the area must have looked and felt during both World Wars, when it was on the front line; there are lots of cemeteries and markers that testify to this. 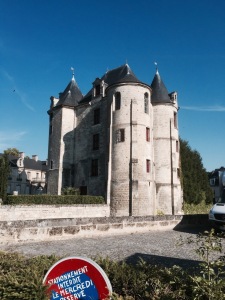 I could have headed up to Compiègne, or to the nearby Armistice site, however I decided to cut through the forest to Pierrefonds instead. The Armistice site has a duplicate of the railway carriage – Ferdinand Foch’s railway carriage –  used in World War 1 to sign the agreement bringing an end to hostilities. The same carriage was used in World War 2 when Germany forced France to surrender; Hitler brought the carriage from Paris especially, to humiliate the French, then took it to Berlin to display before it was destroyed by the SS in 1945.

But I skipped all that, as thoughts of the War were leaving me feeling a bit chilly. Riding through the Compiègne Forest was much more pleasant, and then I turned a corner and saw the Chateau in Pierrefonds, which is just like something out of a Disney movie; I think it might have inspired the Disney Castles you see.

Pierrefonds Chateau is truly magnificent, and the surrounding town very picturesque. It was however quite tricky getting a good photo of it due to the sun being in the wrong place. Leaving the town involved a steep climb, followed by more ups and downs as a made my way through the forest and out into open farmland. It was very pleasant riding even if I was burning a lot of calories in getting anywhere; I passed several other cyclists out enjoying the shaded lanes and lovely scenery.

Stopping for a break in Foret de Compiegne

Walled house in the middle of the forest

Néry in the sunshine

Orrouy – another ancient looking village with lots of painful cobbles

As I cycled slowly over the bumpy cobbles in Orrouy a Belgium tourer with fat tyres caught me up; he was having an easier time with the terrain. We had a quick chat and cycled together for a short while, before he turned off towards a campsite on the outskirts of Paris – probably better move than one in the middle of Paris but we live and learn.

My map ran out on the outskirts of Paris, before getting to the suburbs, so I was reliant on my Garmin to successfully penetrate the city’s outer arrondissements, and get to the centre. It was no easy task, with a lot of twists and turns, and pretty slow due to all the traffic and traffic lights. I was also feeling pretty tired, both physically and mentally, after a few days hard riding and the hot weather, and had to step up my alertness a few levels due to the crazy Parisian driving tactics; they don’t give you much space, are fast and pretty aggressive. I managed to get on cycle paths for some of it, Greenways I think, but not sure if any of it was the actual Avenue Verte; London to Paris route. I shared one section with a few rats out routling about for food; good to see them cleaning up after us humans.

I made it to the centre and slowly walked/cycled through to my campsite in the Bois du Boulogne, a story best told through pictures. Needless to say Paris was as impressive as ever, with stunning architecture, wide boulevards, and a great atmosphere. It is strange to think the last time I was here was with Lucy several years ago.

Pretty happy to have made Paris, another milestone

Eiffel Tower on the skyline

Me and Lobster at Arc de Triomphe

Riding up Les Champs-Élysées dodging buses, taxis and cycle taxis, all the way to the Arc de Triomphe, is an experience I’ll never forget; it was great to reach this iconic landmark in the centre of Paris. I spent quite a lot of time dodging people taking photos and selfies too – I wonder if they actually take the time to take in what they’re seeing; the street traders selling selfie sticks were doing well in any case.

After a long, hot, and dusty day I finally made it to my campsite in le Bois du Boulogne, the latter being slightly tricky to navigate through, and I did nearly go the wrong way down a one-way cycle path with pelotons coming the other way, which could have proved disastrous! 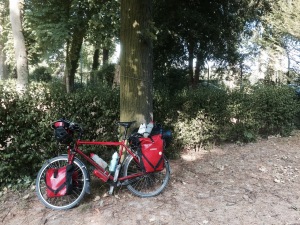 The campsite was expensive at €17, very noisy being next to main roads, and getting tent pegs in proved challenging to say the least, but I’d not expected anything less of somewhere in the middle off Paris. It has good facilities, as well as a restaurant, bar and snack van, although I couldn’t get the wifi to work. I enjoyed a ‘Rosbif’ dinner from the snack van, as well as a cold beer, and slept well despite the rock hard ground and noise from traffic. 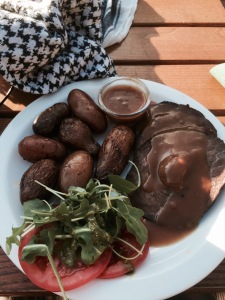 I decided to head straight for Fontainebleau the next day; Paris was just too busy and expensive, although I want to come back without my bike for visit, to go round the catacombs and a few other bits I haven’t seen before; perhaps a visit to La Moulin Rouge!

I was up early and on the road by 8 o’clock, keen to get down to South of Fontainebleau for a rest. I realised I was pretty tired as was finding it harder to speak French than a couple of days ago, so definitely time for a pause. Still covered about 100km, but it was slow going, especially getting out of Paris. 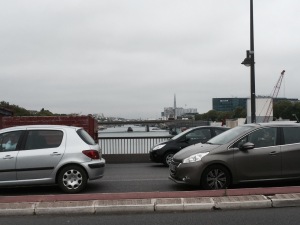 Leaving Paris – top of the Eiffel Tower in the clouds

If Charleroi had been a akin to Mordor, then Paris is more like Minas Tirith, however I can’t help feeling it’s a bit under siege from the surrounding arrondissements, not all of which feel that friendly. It was a struggle to reach the outer limits, and took ages to finally reach countryside again. It didn’t help that it was a grey and drizzly day, however it was quite nice to be out of the sun for a bit.

Riding alongside the Seine

Riding alongside the Seine 2

Melun – think the island bit in the middle is a prison

I pedalled alongside the Seine for a bit, and generally followed it South to Fontainebleau, through lots of towns and villages, including Melun, where I think there must be a prison on an island in the middle of the town.

Fontainebleau proved to be a useful town; I reached it in good time, having started early, and checked Smaug into ‘A La Petite Reine’ for a service, as well as a replacement chain and rear cassette. I’d emailed the shop from Paris and they proved helpful, good value, and efficient; cost me about €75 for a new chain and cassette, as well as new rear brake pads, and the mechanic threw in a replacement part that I can fit to probably mend by bike stand. I just need a Allen key I don’t have with me to do so, however my parents are visiting in a couple of weeks so – Dad, will be in touch ref what tools to bring!

Last stretch along a cycle path to Fontainebleau

Whilst my bike was being serviced I had a wander around Fontainebleau, had a 12 inch Subway sandwich, followed by a Tuna baguette from a boulangerie, and a pain-au-chocolat for good measure. I also picked up a Michelin map for central France so don’t have to completely rely on my Garmin, which is a relief; I prefer paper maps, far more interesting.

It’s a relief to have a new chain and rear cassette fitted, as the old chain was starting to slip, and whilst I could fix a broken link it’s a messy job. I don’t think I’ll need to get them replaced again until I’m on my way back from Istanbul, and perhaps not until the UK, however I’ll need new tyres before then so might get everything done at once. The chain and cassette did over 3,000 miles which I don’t think is bad, however I’d be interested to hear opinions on how often you should change chains, cassettes, and the front chain ring for that matter, and also on how often people clean their chain, and how they do it, whilst on tour? I’m pretty amateurish when it comes to bike mechanics so advice is always appreciated.

It was only a short ride down from Fontainebleau to Grez-sur-Loing, and my campsite for a couple of nights; Camping Les Pres. It did however start rain quite hard, and that coupled with the spray from passing traffic left me quite damp.

Bridge over the river from campsite to Grez-sur-Loing

Le Loing – you can hire kayaks or canoes

By the time I reached Grez the sun had come out again, and I dried off quickly. The small town proved lovely, and has in the past been a place frequented by many artists. It has narrow streets, some cobbled, pretty architecture, a great small shop and boulangerie. In short I could probably spend at least a week here exploring, and doing some climbing in the surrounding area; loads of people come here for the outdoor activity, especially climbing. Les Pres camping is also a brilliant place to stay; fairly basic, but that’s fine, and only cost me €12 for two nights, which makes up for the wifi being expensive.

I’ll write about my day off in Grez-sur-Loing, and doing a bit of bouldering on an elephant tomorrow, however for now I’d better figure out where I’m going next; towards Orleans I think. I’ve also downloaded eBooks reader on my phone, as I’ve been missing a good book; been working my way through Alice in Wonderland as it was on 50p, and been ages since I read it. Might revisit LOTR next, so be warned; they’ll be more analogies with the landscape of Middle Earth. Thinking about it the area surrounding Fontainebleau is a bit like the Shire, without those pesky hobbits. A demain tout-le-monde.