Routes and stats from the last couple of days, not including today which I’ll do tomorrow:

Pedalling 70 miles a day seems to be becoming the norm, however I need to slow down a bit so as not to overshoot a rendezvous with my parents in Northern Spain in about a week. I think I’ll have a day off in Bordeaux and enjoy some wine.

–> 23 June
A bit of overnight rain freshened everything up, and washed the dust off my tent. I awoke to another gorgeous morning in the grounds of Chateau Rolandiere, and got away by 09.00, heading down to Pouzay where I stopped at a boulangerie for breakfast; two croissants, and a pain-au-chocolat which I saved for later.

After that it was a case of riding down quiet roads alongside the Vienne river to Chatellerault, passing fields of young sunflowers, and being passed by quite a few road cyclists who all said ‘Bonjour’.

I was riding at a good pace, averaging 20km/h in the morning fuelled by a couple of Grimbergen beers from last night; a slight tailwind also helped. I passed a number of chateaux,  however this one in Dissay was especially impressive. 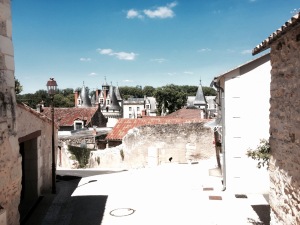 Dissay – downhill to the Chateau

For the first time I wore my summer cycling gear, as it’s getting pretty hot, and applied judicious amounts of sun-cream to avoid burning my rather pasty arms.

I cycled past the ruins of Old Poitiers, and the site of the Battle of Poitiers. I’m not sure if the latter is the site of the battle of 1346, during the 100 Years War, or the previous battle in 732 when Charles Martel defeated the Umayyad Caliphate, thus turning back the tide of Islam and preserving Christianity in Europe. The battle of 732 is regarded as a major turning point in European history, and laid the foundations for the Carolingian (Frankish) Empire. The 100 Years War Battle of Poitiers was won by he English lead by ‘the Black Prince’, who won the previous Battle of Crecy and the next battle at Agincourt.

After passing a large golf course and enjoying cycling alongside the river I reached Poitiers, and found it one of the easiest cities to get into so far, albeit with a steep climb to get to the centre, up some lovely narrow streets.

Smaug taking a break next to a strange fish statue

Lunch stop – panini from cafe on the right

As it was lunchtime I stopped for a couple of panini; some might call two excessive but not when your burning 3,500 plus calories cycling each day. I had a walk around, enjoying some shade, then continued heading South through lots more farmland, dotted with chateaux and old ruins. 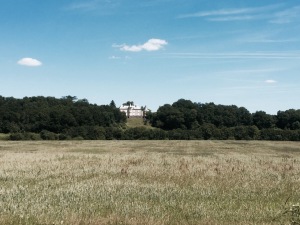 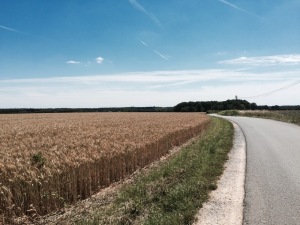 I arrived in Couhe, my destination for the day, and found the campsite had a swimming pool and water slide, as well as a jacuzzi. The Peupliers campsite has got to rank in my top 5 of the tour so far. I nipped to the supermarket to get some food, et du vin Rose, then took the plunge. I grinned all the way down the water slide, several times, feeling like a kid again, and a swim post a hot day’s ride was blissful. I practically had the pool to myself, and with free wi-fi the campsite was definitely winning.

Peupliers – camped next to the river, evening falls

I spent the evening, post swim, catching-up with things on the Internet, as well as my blog, and bought a ticket for Bellowhead’s Farewell Tour next April; sad that they’re calling it a day but don’t want to miss their last gig.

Whilst I coped with the sun and heat well today, and am continuing to drink lots of water to stay hydrated, I had a few equipment fails. My tent zip broke again, but I’ve since mended it, and my rear panniers partially came off over a speed bump and had to be re-attached. I lost two of the spacers from the pannier rack attachments, which I’ll need to replace at some point, but they’ll be alright for a bit longer; just means they’re slightly loose and might detach more easily over bumps.

–> 24 June
It was a bit of an effort getting up this morning, after a good night’s sleep and it being a very comfortable temperature in my tent, shaded by trees. Perhaps the broken zip was a good thing, as it lets cooler air circulate, but I don’t want the circulation to include mosquitos! 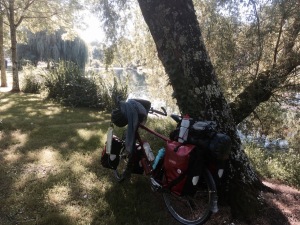 Peupliers – Smaug packed for another day

I probably should have taken a rest day at the Peupliers campsite, but as usual I felt the urge to be on the move. A few of us cycle tourers have been discussing ‘Why go cycle touring?’ and what drives us to keep going, or what pace to go at. It’s an interesting topic and can depend on whether you’re cycling solo or as part of a group. Tony wrote a blog post on it here – http://gillandtony.co.uk/why-go-cycle-touring/

I tend to travel quite fast, relatively speaking, and bank time to use in the future in case I find somewhere I want to stop, or divert to. It would probably be different if I was touring with other people, as I’d spender longer in places, maybe, I don’t know, will have to give it a try sometime. To an extent it can depend on how you’re feeling, and usually the battle is a mental one not a physical one.

Feeling pretty good, mentally as well as physically, I got off to an early start and pedalled off through lots of countryside and small villages, passing old churches and fields full of ripening corn and growing sunflowers. You get the impression not much has changed around here for hundreds of years, aside from the fact they’re using combine harvesters now, a few of which are already seeing some action.

Cows for the first time in a while, Lobster happy

Lots of irrigation going on – water often drawn from rivers

I headed down to Ruflec, then on to Verteuil-sur-Charente, a delightful small town with a beautiful château, and very picturesque streets and buildings built alongside the river. I stopped for lunch and was reminded that Camembert doesn’t travel well in the sun – it was a bit runny but still tasted fine, and the bananas complimented it well.

Then it was a long ride down to Angouleme, involving quite a lot of hills and many more small towns. I went through a lot of water again as the temperature approached 30 degrees, and may well have exceeded that. It was pretty dusty too, and the pollen count is still a bit high which can cause irritation; lovely down by the river though.

Crossing the river Charente in Mansle

Cellettes – lovely spot by the river

Angouleme itself is built on a hill and dates back many centuries. It commands an important convergence of several roads, and because of this has been the site of many conflicts over the years, coming under siege a lot. After a fierce climb in the heat to get to the centre, I paused for a look around before heading West.

Angouleme – view from the ramparts

Angouleme – view from the ramparts panorama

I loved this house in Angouleme 2

I loved this house in Angouleme

It took me a little while to find but I joined a cycle path alongside the Charente post Angouleme, which took me towards Sireuil, my destination for the day.

Riding alongside the Charente to Sireuil

Latterly I passed quite a lot of grape vines, an encouraging sign, before reaching Camping du Nizour. I stopped at a shop on my way there and bought some strawberry milk, which hit the spot. I think milk, and flavoured milk, is going to become a new staple, it being cold, and full of calories and protein. I drank loads on my Bike around Britain tour but had forgotten about it until now; it really is perfect for long distance cycle touring, and recovery from any sort of exercise. 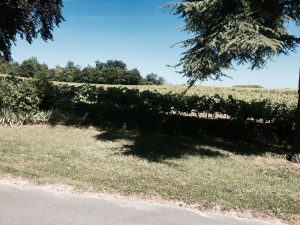 The campsite was another good’un, with a swimming pool and bar/snack cafe, and not expensive. The pool was a blessing after hot day, and really revitalised me, having pedalled slightly further than intended due to a bendy route. The friendly and helpful owners gave me another chance to practise my French as I tried to decide on my route for the next few days; they also supplied reasonably priced cold beer. 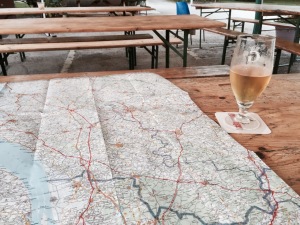 Planning session in Camping du Nizour – where to next?

As I may have mentioned already I need to slow down a bit so that I don’t overshoot a rendezvous with my parents in Northern Spain, in about a week’s time, which I’m really looking forward to. I’ll definitely have a day off before then, probably near Bordeaux, and will try to have couple of slower/shorter days which might be a bit of a challenge given earlier comments; it’s really hard to slow down sometimes. I’m on track to get to Salamanca for my birthday, which  looks like a great city to visit, and whilst I have time on my side I don’t want to get too distracted and end up not getting there in time. I think it’ll all work out fine, but I must remember there are some rather large hills/mountains coming up!

One other thing from today; I’m finding it easier to get in the zone, and not keep looking at my odometer and how far I’ve pedalled since breakfast. Cycling for hours gives me time to think about lots of things, especially when I’m ignoring my Garmin, whilst keeping one eye on the route; I’ve neglected to do that a few times and ended up in a few odd places – usually fun but sometimes frustrating. Stuff I’ve been mulling over recently includes writing a book based on my journey, but a parallel fantasy version thereof involving an adventure, trolls, no doubt a quest or two, and giving people, places and events I’ve encountered a slight twist. For example Helsinger in Denmark might turn into a place where monks sing day and night, to keep the demons escaping from hell. I probably ought to think about writing and trying to publish a factual account of my tour too, but one thing at a time.

I also keep thinking about what I want to do with the rest of my life, the eternal question that so many ask of themselves. I envy those people who seem to know exactly what they want to do when they grow up, although I don’t think there are that many who are certain. Maybe I just haven’t grown up yet! I’ll keep mulling possibilities over, but one thing’s for sure, more adventures either by bike, foot, or otherwise, are on the cards.

Apologies for any spelling errors, I’ve had to write this a bit more quickly than normal due to wi-fi limitations. I’ll also try to re-label some of the photos more accurately at some point.