Before I recount tales from the last couple of days, here’s bit of a stats summary for the tour so far, which includes today (29 June). Slight warning; this post may have been compromised by the introduction of Sangria this evening, courtesy of the very friendly staff at Camping du Lac in Ondres.

Distance pedalled: 3,441 miles, or 5,538km
Days since Nordkapp: 55 (including a couple of rest days)
Average distance per day: 100.69km, or 62.5miles (includes rest days)
Number of punctures: 5, but none recently, touch wood
Number of punctures in Thermarest: 3 after thorny ground last night (d’oh)
Number of new chains: 1
Number of new rear cassettes: 1
Number of new saddles: 1 – changed to a Brooks in Sweden and it’s now worn in, very good decision
Min temperature: About 0 degrees Celsius – have cycled in a snow storm
Max temperature: About 33 degrees Celsius, supposed to be hotter tomorrow though
Did I bring too many pairs of socks: Yes, as well as a few other clothes I’ve never worn
Favourite city: Hamburg or Bordeaux, with Paris and Stockholm very close behind
Favourite leg so far: Current leg down from Bordeaux to Spain proving excellent, Scandinavia also fantastic, but parts of it very hard work with headwind

Let me know if you’re interested in any other info.

Here are my routes and stats for the last couple of days:

–> 27 June
I was up early at the campsite just outside Bordeaux, mainly because the Spanish motorcyclists were up early and it was a very small camping area. I thought I may as well get up and on the road to maximise my rest day opportunities later.

Surprisingly it had rained slightly overnight, and was still overcast in the morning, with a slight drizzle which kept everything cool and fresh. I packed up and pedalled off by 08.30, slightly nervous about the route which involved using one main road marked red on the map. You’re mostly allowed to cycle on these, but they can be very busy, and I was hoping there was a cycle path running alongside it. I didn’t really have much of a choice in any case, roads being less common South West of Bordeaux. 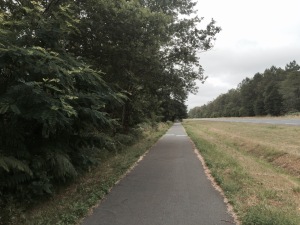 As it turned out the road was fine, and did have a cycle path running alongside it for some of the way. Compared with the E04 in Sweden it was positively heavenly! Although there was a fair bit of traffic it was pleasant riding in the cooler temperature, through some forest, and the sun came out by the time I made it to Biganos. I pedalled 44.5km today, however about 10 of these were once I got to Biganos as I had a quick ride around the town once I’d checked into the campsite, before having a siesta.

I’d arrived at Les Marache Vacances campsite by 11.00, so had plenty of relaxing time left, but needed to get my washing done first. I was greeted enthusiastically by Charlie the campsite dog, who then decided to have a nap too.

Les Maraches Vacances is an excellent campsite, and I was able to set up my tent in a partially shaded pitch, leaving enough room in the sun to dry my washing! 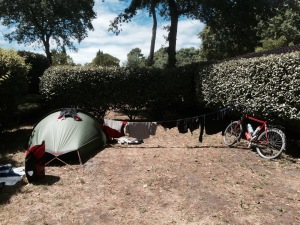 After that it was down to the serious business of chilling out, starting with a Grimbergen beer.

Grimbergen beer – best beer of the tour so far

This was closely followed by some reading, whereupon I dozed off again, but roused myself for a swim a bit later on on the afternoon; it’s a hard life sometimes.

After doing some planning I went to the campsite restaurant for dinner, splashing out a bit on a very nice meal, served by a singing waiter.

First course – Lobster after the melon

There were several other cycle tourers at the campsite, included one family all on bikes; two adults and 3 children, all kitted out.

I think the cycle route down the coast from Acarchon is very popular; the Velodyssey. Over the next few days I saw loads of other cyclists, most just out for the day but a few tourers too. It’s not surprising as the Velodyssey is a fantastic cycle route, passing through lots of forest, right next to the coast and lots of beaches.

After a bit of a blog update and some Rose wine, I fell asleep very quickly!

–> 28 June
It was a bit of a longer ride today, covering 118km in 6hrs and 40 mins. As the crow flies it was probably half that from campsite to campsite, however I was following the coast and Velodyssey route, which isn’t very straight, plus I enjoyed a few detours. 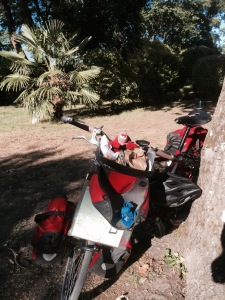 Bidding goodbye to Charlie, the campsite dog, I was on the road by 09.30, and headed to Arcachon first, through a bit of forest and past a big canoeing centre.

Through the forest to Arcachon

In Arcachon I picked up the Velodyssey route, which is also Eurovelo 1, down the Atlantic Coast. Arcachon looks to be very popular spot for a holiday, with a busy harbour and lovely beaches.

Cycling the boardwalk in Arcachon

After Arcachon I followed the trail South, mostly on dedicated cycle paths, with occasional bit of road thrown in to keep things interesting. The route weaved its way down the coast, through nice shaded forest where the smell of pines and lavender permeated the air. I passed some enormous sand dunes in Pylar, before arriving in Biscarrosse where I stopped for some lunch; just fruit and biscuits after yesterday’s spending!

View of the forest from outside Arcachon

I went down to the beach and watched the surfers for a bit, enjoying the sea breeze. This part of the coast appears to be a surfing hotspot, and I can see why with all the fantastic beaches and a decent swell. I was definitely starting to feel like I was on holiday too; a feeling that is persisting but might come to an abrupt halt when I hit the Pyrenees and higher temperatures.

Post Biscarrosse the trail went a little bendy, heading inland and slightly back on itself to go around a military training area. This is mostly why I ended up doing 118km; I could have stayed on the road and cut a few km off the route, but it wouldn’t have been anywhere as nice a ride – the forest trails are lovely, despite a few hills.

Boats on the lake 1

Boats on the lake 2

I cycled past two big lakes, packed with people enjoy a hot Sunday afternoon, both in the water and on the beaches; loads of water sports too. Just around the corner from the beach there was a nice harbour with sailing boats moored up. A little further on I missed a sign and accidentally diverted to another smaller lake, where it was good to see the Union Jack flying.

After a long ride I made it to Mimizan-sur-Plage, where I had my eye on the Camping Municipal du Plage. It turned out to be a huge campsite, packed full of kids learning to surf for the most part. The Wifi was rubbish so I could do any planning or blogging, but ended up chatting to a retired Scottish tourer, Ken, who has cycled down from Roscoff; good to swap a few stories and tips. I also didn’t need to do much planning, as the route to Bayonne is well signposted along the Velodyssey trail.

Dinner was pizza from the campsite snack bar, as well as a new concoction made up of leftovers; Camembert, bread, raspberry jam and Tabasco goes surprisingly well together! Ken was finding the heat a little over the top, however I’m enjoying it so far; as long as I remember to drink plenty of water it’s fine, and I’m going to start setting off earlier in the morning to avoid the heat later on. The hottest part of the day isn’t midday, it’s more like 15.00 or 16.00, so I’ll aim to stop around then, and do a few shorter legs when the hills get bigger.

One minor issue today; I didn’t notice the thorny ground where I pitched my tent, so my Thermarest mat ended up with a few holes in it, as did the bottom of my tent. They were both however already a bit compromised, the tent by Scandinavian varmint incursions, and the sleeping mat just has a slow leak somewhere; nothing to be majorly concerned about.

Tomorrow it’s onwards towards Bayonne, before turning inland towards St-Jean-Pied-de-Port on the Spanish border; getting close to starting the Camino de Santiago, as well as a visit from my parents.