Istanbul. A city I’ve been thinking about visiting for years, and now I’m here. I’m finding it slightly surreal after 4.5 months on the road, and nearly 7,800 miles pedalled. Reaching Istanbul completes my second major objective of the tour, and is a great sense of achievement after being pretty nervous about the route; just goes to show that getting out of your comfort zone, and overcoming your fears, is a good thing, leading to some great experiences.

Here the link to my final leg:

I’m now on holiday for a few days before starting my journey back to the UK; a distance of about 2,100 miles to pedal, all the way back to Norwich. I’m intending to ride alongside the Danube for some of it – here’s my expected route: 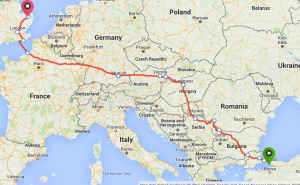 Intended route from Istanbul to Norwich

If you fancy flying or catching a train out to join me pedalling for a few days, drop me an email. It should be a fun ride back through Europe, especially the bit alongside the Danube, pedalling literally through castles, and through more countries I haven’t been to before.

I haven’t done a stats update for a while, so here’s one:

–> 15 September – to Istanbul (140km)
I’ve heard the expression ‘the city that never sleeps’ applied to lots of places, however I think it truly fits Istanbul. I have rarely been to anywhere quite so vibrant; a bustling metropolis with so much to experience. I wasn’t sure if I make it all the way today, after a few long days in the saddle, and 90 miles left to pedal before reaching objective 2 of my tour, however once I got going I knew I wouldn’t stop before I’d made it; barring mechanical failure.

After a very good night’s sleep, and consuming a buffet breakfast included in the price, I felt ready for the ride ahead, and the good news was my legs didn’t feel to achy after the previous few day’s efforts.

My conscientious application of suncream of course summoned the clouds, however little could dampen my spirits as I approached Istanbul. I rejoined the D110 after leaving crazy Tekirdag behind, and started the long ride East. The road got steadily busier as I got closer to my destination, and I had to tackle a series of big ascents, climbing a total of 1285m during the course of the day.

Road to Istanbul – passed a lot of Mosques like this

Lots of melon sellers by the roadside

Outskirts of Istanbul – they go on for a long way

You can see tis tower for miles away, but it’s not near Istanbul centre

Finally made it to the city walls – crazy traffic

The D110 turned into the D100, passing Silivri, and several other large towns on the way, all merging into a constant metropolis along the coast to Istanbul. The traffic got crazier and crazier, meaning I was on high alert, with a two lane road turning into 3 lanes, and roads merging or diverging at regular intervals; I used the service road running next to the main road quite a lot, however it was just as busy. Before it got really busy I paused at a garage for an ice cream break, preparing myself for the last 50km to Istanbul; the ‘suburbs’ really do go on for a long way!

After a final long climb, passing a high tower that’d been on the horizon for ages, things got really exciting. It’s not that it’s particularly dangerous, as although the driving is madness everyone seems very alert and conscious of what’s going on around them. There was a lot of beeping, and I had to move quickly on a number of occasions to cross slip roads, or move around traffic. City riding, although mentally tiring, can be good fun as long as you’re careful and cycle ‘defensively’; which basically means be a bit aggressive and make sure people know you’re there.

Istanbul is awash with buses and yellow taxis, and I started to encounter more and more of these as I made it past the airport and into the city proper, letting out an involuntary ‘yabbadabbado’ as I got closer to finishing objective 2.

Opted for the pavement to cross the last bridge

Made it to Taksim Square, now to find a hostel

I crossed over a final bridge (Unkapani I think), which moved about a lot, then rode up a last hill to Taksim Square, where I paused to locate a hostel on my phone. There was a promising looking one about 500m away, right in the centre, so I made my way there. My luck held out as they had space, so I booked in for 3 nights; may change that to 4 depending on how I feel.

Smiles all round on making it – honest, that’s Lobster smiling

Often when entering a city I get a feeling within the first hour as to whether I’m going to like it. With Istanbul the feeling was pretty immediate, especially after a warm greeting from Esme at the hostel; the city has a buzz to it, and I immediately felt at home, and excited about having a proper explore. It was nice to check in knowing I had a few day’s rest coming up, with no need to worry about where I’ll be sleeping, or whether there’s going to be a pack of wild dogs around the next corner!

An evening stroll through the Beyoğlu district

Main shopping street awash with people, late into the night

After a shower I went out for a wander around the Beyoglu district, which is the main shopping area, and separated from the old city by the bridge I’d crossed earlier. I’ll probably visit the old city the day after tomorrow, as tomorrow is going to be dedicated to rest and relaxation. The streets were packed with people; a diverse range of nationalities and appearances. I enjoyed listening to the street musicians who appear regular intervals, and generally taking in the sights and sounds. I wasn’t particularly surprised to find an Irish Bar, and thought it providence that I stop there for a cold beer to celebrate my arrival.

Oh look, and Irish Bar, must be fate

Celebrating with a cold beer, the first of several

Lots of cats in Istanbul, this one was pretty comfy

Loads of restaurants, street food stalls and bars to choose from

Despite the buzz of the city I was feeling pretty tired after 4 serious cycling days, so I retreated to the hostel for the rest of the evening, and enjoyed chilling out with the staff and a few of the other guests; Australian, Turkish, US, Israeli, German – you always meet other interesting travellers.

As always any sponsorship in the form of donations to the Big C, Norfolk’s Cancer Charity, are greatly appreciated and keep me motivated – here’s a link to my charity page: www.virginmoneygiving.com/james

Thank you to all recent donors; you’re all fabulous!