The last day of September and the first of October, that snuck up quick. Definitely getting colder  however I’m hoping the weather will stay sunny; it’s lovely cycling when it’s cold, but clear and bright. Here are my routes and a stats for the last two days:

–> 30 September – to Gyor ( 143km)
After too short a time in Budapest it was time to leave. I could have easily spent another day or two looking around, however my homing instinct has kicked in and I’m keen to make more progress West. Budapest ranks up with Hamburg on the great city front though, and I’ll definitely be back at some point.

Crossing the Danube to ‘Buda’

Another bright sunny day in Hungary

Post breakfast, and trying not to wake fellow dorm mates whilst packing up, I set off on a bright but relatively chilly morning. After negotiating some relatively heavy traffic, including a lot of cyclists on their way to work or college, I rode over the Danube to the Buda side of the river, then through and out of the city via route 1. I wasn’t following Eurovelo 6 initially as it goes on a big meander following the Danube, however I’d join up with it later, touch wood.

The road today was mostly flat, with a few gentle hills keeping things interesting. There was the usual farmland and fields of sweetcorn, but also some woodland which made a pleasant change, and the occasional small town. Like yesterday more no cycling signs appeared on the main road, alongside no horse and cart or tractor notices, however there were parallel roads I could use, or I just ignored the signs and as the road was quiet, and anyway, I passed a few locals on bikes using it. I’m not sure why they don’t want cyclists using route 1 as it’s perfect for bikes, and there isn’t much traffic. Handily there were also quite a few cycle paths to take advantage of, especially in towns.

The road West, near Szárliget

The morning progressed slowly. It’s weird, kilometres in the morning always seem to take longer to cover, in my head that is, whilst after lunch they start to fly by, perhaps because I’m zoning out more, daydreaming away to myself.

I passed a handful of walkers today, loaded with rucksacks and other bags, and wondered if they were refugees/migrants, or just locals. One young chap looked like he’d been on the road a long time; he had that weathered look, a bit like me I suppose. I waved and shouted good luck as he trudged along; he smiled and waved back.

Lidl provided lunch; I love Lidl, it’s cheap, and common in much of Europe. They sell a variety of pastry base products which make good fuel for pedalling, such as pizza type things and sausage rolls. Whilst having lunch I was struck by how I haven’t heard any crickets or Cicadas in a while. I can’t remember the last time I heard them but it was fairly recently. Perhaps the colder weather has sent them all to sleep; at least it’s still dry, and no headwind today which was very welcome.

Made it to Gyor

I pedalled on, passing a few vineyards on my way to Tata. Apparently there is a lot of wine production in this area. I arrived in Gyor in relatively good time, and found Topart Camping on the outskirts without too much trouble. It was good to be camping again. The site was quiet, a small family run affair, and I was the only camper. There were a few people in the chalets, and one enthusiastic German visitor in a camper van who I chatted with for a bit, but it was otherwise peaceful and I was left to my own devices.

Dinner was from a local supermarket, Aldi this time, and I partook of some Hungarian white wine which proved very tasty; thought it was appropriate after seeing lots of vineyards today. After a bit of writing and planning I crawled into my tent for an early night. It gets dark about 18.30 now, so I wanted to get an early start to give me enough time to get through Slovakia and on into Austria tomorrow; there’s a campsite just to the West of Vienna I’m aiming for. 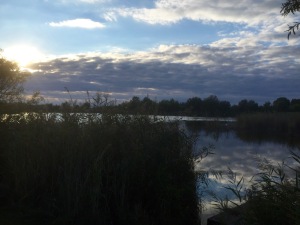 Everything beginning to look a bit autumnal

It’s the 01 October tomorrow, which marks 5 months since I left Norwich. I think I’ve got about 900 miles left until I reach Dieppe, and then a few hundred once I’m back in the UK, however that depends on how many detours I take. Still on track to get back in time for the Norwich beer festival, and I’m hoping to make it to another small festival before that; the ‘Yestival‘ being run by Dave Cornthwaite for the first time this year.

One last update; no evil dogs chasing me today, perhaps I’ve seen the last of them now…however I’m sure their sheep overlords have more nefarious schemes in store for me.

–> 01 October – to Vienna, via Slovakia (163km)
Despite the cold I had a very good night’s sleep, cosy in my tent and sleeping bag. It’s a bit odd it being cold, after so long being hot, however I’m sure I’ll get used to it quickly. It’s also not really that cold yet, compared with the early days of the tour in Norway; I just need to acclimatize.

I had some vivid dreams last night, involving sword fights. I’m really not sure what that means, however I was on my bike and pedalling by 07:45, alert for any Viking ambushes; there were definitely Vikings in my dream, and Orcs for some reason. Thankfully, but in some ways disappointingly, there were no incidents of a swashbuckling nature as I rode up Eurovelo 6 to the border with Slovakia. In fact the whole day was pretty relaxing, with most of the riding taking place on cycle paths next to the road.

Passing more fields of sweetcorn – lots of harvesting going on

Made it to Slovakia, country number 23 of tour

It was about 60km to the border, through farmland in the sunshine. I stopped at a garage just before Slovakia to try to use up all my Hungarian change; I had a lot of Forint coinage to use, and left with a lot of chocolate bars in my panniers, so all good.

There’s no official border crossing if you follow the Eurovelo 6 route, I was just suddenly in Slovakia. I don’t know if there’s something more substantial if you follow the main road. I realised I’d changed country as I got a text from Vodafone welcoming me to Slovakia, however there were other changes visible almost immediately; lots of cyclists appeared in lycra, which had been rare in Hungary. The cycle route to Bratislava, on top of a levee, is very popular with cyclists and people roller-blading, and it was nice to have folks to wave or say hello to again. I’m not sure what people think of me; my shorts have got some big holes in and I generally look a bit unkempt, however I’m determined to make it back to the UK without having to buy any new kit, if at all possible.

The Danube flowing past Bratislava

I arrived in Bratislava but cycled pretty much straight past it, staying on the signposted Eurovelo 6 route around the outskirts and on the South side of the Danube. Then it was on through more countryside, and over a few small hills, before I was suddenly in Austria, again without really realising it. There may have been a sign, I don’t know, I spent quite a while on the phone as I was pedalling today, chatting to family, so could have missed it.

Still in Slovakia at this point – cycle path alongside railway line

Castle on hilltop, Hainburg an der Donau – think this was where I crossed into Austria

Nice tre lined cycle path welcomes me to Austria, not that I realised it

There followed a long ride to Vienna, which I thoroughly enjoyed, being in high spirits; crossing borders into new countries always gives me a boost. I was following the Eurovelo 6 signs still, however it all got a bit confusing due to the volume of cycle path signs, and somewhere along the line I must have missed one. I carried on along the main road, which was probably more direct anyway, passing the airport, then through the suburbs and into the city centre. Vienna proved very busy, still being packed with tourists despite it being later in the season.

Assume this is Vienna Cathedral

I walked/cycled around Vienna for about an hour and a half, taking in a few sights, sounds and smells. I’m afraid I don’t know what all the buildings are, however the architecture was in general very impressive and elaborate, and I can see why lots of people visit. For me it was just a bit too busy and not as friendly as Budapest. I think it would be better to visit without my bike; I still want to see a concert in the city so will have to come back. I guess Vienna reminds me a bit of Paris, with all the grand buildings, and masses of people, and a bit impersonal.

Stage being set up or taken down near palace; concert for refugees?

Having said I didn’t know what any of the buildings were, my iPhone has handily attempted to identify them via the location; very helpful, and hopefully mostly right. There were also a lot of horse and carriage taxis, which looks like a nice way to see the city; forgot to take a photo of them however the drivers were dressed up very smartly.

I paused at the Rathaus (town hall) for a webcam opportunity, and was spotted by the folks at home, however the camera was quite a way away so the image isn’t too clear; good to wave though. Then I made my way West out of the city, doing my best to avoid trams, and more importantly tram lines which can be deadly if you get a wheel trapped in them. I hadn’t anticipated the long climb over the hill to my campsite for the evening, which was a little tough at the end of the day. I had to ascend about 300m, and then negotiate a steep downhill section which I couldn’t really enjoy due to parts of it being a 25% slope, with big bends; my brake pads are wearing out. My Garmin device also decided some narrow paths with loads of steps were fine to cycle on, so I had to route around these adding on a kilometre or two.

Into tree covered hills…lots of hills

Vienna West campsite was a welcome sight, and I quickly pitched my tent, showered, and went in search of food. The campsite has its own restaurant however it wasn’t very friendly, so I walked down the road and found a pizzeria which did the job nicely, and allowed for a cold beer whilst waiting for my pizza; a Daviola, very tasty.

Got this text when I arrived at the campsite. Do you think they’d deliver?

Immense Winnebago, for travelling in comfort; prefer my tent

Post pizza I did a bit of planning, working out my route along the Danube. It looks quite wriggly so might take longer than anticipated, but should be very entertaining. The night got progressively colder, and very damp due to a heavy dew, so it wasn’t long before I retreated to my tent and got cosy. It’s going to be odd getting home and not sleeping in a tent for a while; I think I’ll miss it.

In other news I have a cold, which is more annoying than anything else; not really impacting cycling, just have a runny nose and slightly sore throat. Will try to cure it with Schnapps.