I woke up and listened; only a faint rustling of the tent canvas, the wind had dropped, and it was sunny! Could this be the glorious day’s cycling I’d been waiting for?

Feeling buoyed by the thought that today was going to be a good’un, and with a new country in my sights, I was up, breakfasted and packed in good time. The campsite cat brought me a present, a mouse wrapped in leaves, which was a bit odd, and then ducks started following me around.

When the goats in the mini zoo started bleating I started to wonder if I’d developed Dr Doolittle traits overnight, or maybe this was all a dream and I was in fact still asleep, and it wasn’t such a nice day after all. Not wanting to consider the latter a possibility I got on the road quick.

There were plenty of people up early, paddling in canoes, or sailing in small yachts down the narrow stretch of water between the campsite and Svendborg. It all felt very relaxed and holiday like.

I rode over the bridge to Svendborg and then turned left, following nice cycle paths alongside the road to Faaborg. The scenery was more varied and interesting than yesterday, with a few hills thrown in for good measure.

Windmill on the way to Faaborg

Arrived in the nick of time for the ferry

It was so nice to be cycling without a headwind. I hardly looked at my Odometer, and could just relax and enjoy the sunshine and countryside. Before long I reached Bojden, just as the ferry arrived from Fynshav; a short 10km crossing to Als and Jutland.

Smaug looking cool next to motorbike

Off to Als, then Jutland

Ferry – looking back to Bojden

Ferry panorama – on way to Fynshav

On board ferry – everyone out in the sunshine

After enjoying a hot chocolate and pastry on the ferry I pedalled on from Fynshav to Sonderborg, which didn’t seem to take very long, arriving in time for lunch. I walked through the town stopping to buy a hotdog from one of the many purveyors of such fine foodstuffs.

Sonderborg and first hotdog of the day

Hotdogs in Denmark appear to be very popular, with several different varieties. I preferred the Ristet, which comes inside a bun and is topped with pickled cucumber, crispy onions, mustard, ketchup, and remoulade. 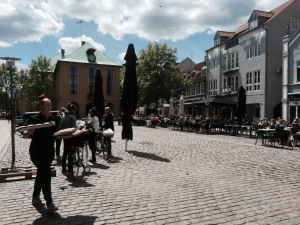 Lots of people out in cafes in Sonderborg

Needing to use up my Danish Krone and I decided I’d eat my way through the rest of Denmark, and had another Ristet for good measure; I’ve been losing too much weight anyway, at least that was my excuse.

I paused on the bridge out of Sonderborg, hoping that the folks at home might be able to see me on the webcam, but also to stop as the middle section was raised for a boat to come through. Unfortunately I couldn’t delay long as it was just too busy, and I’m not sure I timed it right for the webcam. I cycled on to Dybol, then turned South and crossed the small island before rejoining Jutland; lovely quiet roads and cycle paths again. 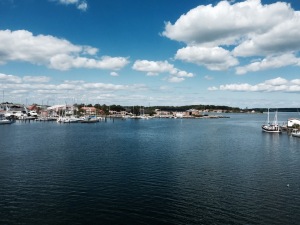 I followed the Route 8 cycle path a lot of the time, not out of any particular design, it was just going in the right direction. I was also having a day of being open to possibilities, so if I saw a cycle track or nice road that went the way I wanted it to, I took it. I rode down the side of Flensburger Ford, through a number of small towns. This is obviously quite a big tourist spot, and very beautiful, with some lovely yachts out on the water (when I win the lottery etc).

After relaxing next to the Fjord for a bit, and of course taking on vital nourishment, I thought I’d better get on with the task at hand. I continued to follow Route 8, which decided to take me off-road and through the woods for a bit, as I got closer to the border with Germany. 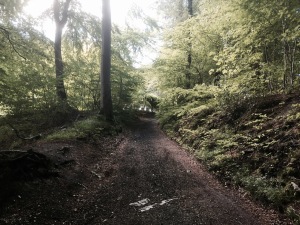 It was slightly awkward cycling for a bit, and my bike developed an annoying squeak which I couldn’t identify the source of; it’s still doing occasionally now, a few days later, and I don’t know what’s causing it – I’d better investigate further in case it’s a problem that’s going to get worse. 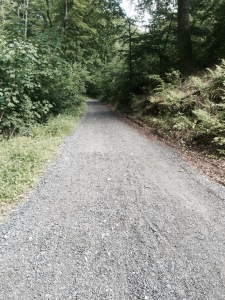 I finally made it out of the trees, which had provided some welcome shade and smelt nice, and could see Germany across the bay. There was a beach and people swimming; in fact one cyclist arrived in the spot below and decided to go for a swim; I nearly joined them. 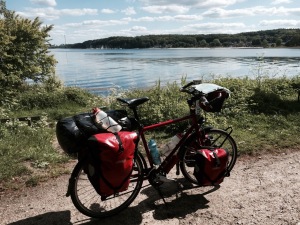 Route 8 – that’s Germany over there

In this case I resisted the temptation of a dip, as I needed to get through Flensburg, and carried on towards the border. I was keeping an eye out for customs officials as I’d seen a few signs suggesting they might patrol round here, but didn’t see any. In  fact, when I got back on the road, I barely noticed crossing into Germany.

Beach just across the border in Germany

For some reason my Garmin decided to switch off at this point, so I had to restart it and my route tracking, hence there are two links to today’s ride; a total of 119km pedalled in 6 hours and 45 minutes:

I was in country number 6 of this tour! I rode on to Flensburg and walked through some of the city. Again there were a lot of tourists out and about, enjoying the sunshine and street cafes. Flensburg looks nice, with some lovely older parts to it.

A square in Flensburg

The cobbled streets were slightly jarring on my still wonky hand, and always make me worry about my wheels, however I made it through and cycled South the Jarplund, where the ACSI app on my phone told me there was a campsite. It was a bit of a maze getting out of Flensburg whilst trying to avoid the busier main roads, and stay on cycle paths. I made it to the campsite but had to go around the houses a bit to get there.

At the campsite I met up with 3 other cycle tourers from Stuttgart, as well as an Italian motorcyclist from Italy; Larissa, Romulus, Alex and Claudio. Claudio is on his way to Iceland, and will be getting the ferry with his motorbike from North Denmark; there are a limited number of ways of getting to Iceland by ferry. Larissa, Alex and Romulus were just finishing a week of touring around Northern Germany, and are heading home on Saturday; Romulus has done loads of cycle touring in the past though.

Needless to say a fun evening was had, with a few beers and lots of chat about Europe, travelling, politics, and the economy, to name but a few topics. Claudio cooked pasta for everyone which was most welcome; in fact he kept producing food from his motorbike panniers. Thanks Claudio! Hopefully I’ll meet up with the all somewhere on the road in the future.

One thing about a new country – you have to relearn things in the supermarkets; took me about twice as long to pick up supplies, however at least they still have mountains of Haribo still.

All in all, a splendid day!