After an entertaining evening with Claudio, Larissa, Alex and Romulus I had a bit of a late start on 05 June, and still half asleep I left my shampoo in the campsite shower; won’t be the last time. I think there’s something karmic about leaving shampoo in campsite showers, as generally you find someone else has done the same at one of your subsequent campsites, and you can use that instead. 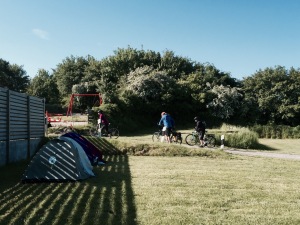 Morning in Jarplund; Stuttgart crew heading off to Flensburg

Claudio headed off early to get to a nearby garage for a tyre change before Iceland, and the others pedalled into Flensburg for a day’s sightseeing. It was good to meet them all, and probably marks the start of running into more tourers at campsites now I’m further South, and the touring season has started in earnest. 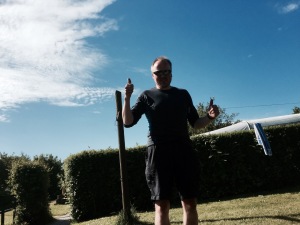 I set off about 10.00, and had a great day’s riding down to Bad Bramstedt, most of it on cycle paths, or pavement doubling as cycle paths that run next to the road. I covered 119km in 6 hours and 45 minutes of pedalling, but was on the road for quite a bit longer than that due to a puncture repair session. Here’s a link to my route and stats for 05 June:

The only drawback of riding on some of the marked cycle paths, especially in the towns, is they’re a bit juddery, and can be stop/starty due to junctions, so I have to admit I didn’t use them all the time as it made progress too slow and increased discomfort in various body parts.

My route took me down to Schleswig, and on through gorgeous countryside, often lovely woodland; a lot of it Beech which is my favourite. 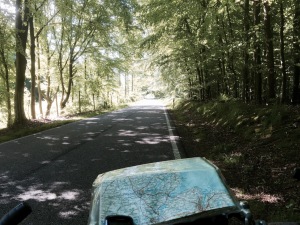 It was the hottest day of my tour yet, and the first time I’ve worn only one layer; just my Icebreaker top, plus my lightweight buff under my cycle helmet to stop sunburn on receding spots and the back of my neck. 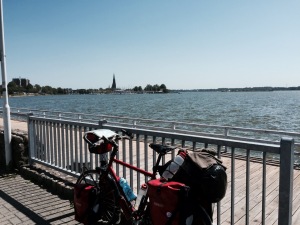 Close to Dannewerk I decided to follow a cycle route that pointed in the right direction, disappearing into farmland. I was a little dubious as to what the route would turn into, after yesterday’s experiences on Route 8, but thought I’d give it a go. 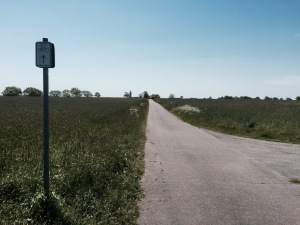 It started off well enough but deteriorated into a farm track, which the bike coped with fine, but it knocked me about a bit; no suspension! 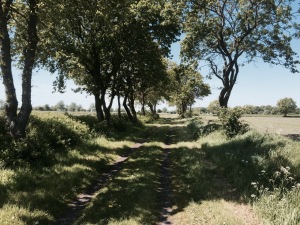 I think there must be an airbase near Dannewerk, as I’m pretty sure that’s what I passed at one point. I also passed a lot of wind turbines, doing their bit to help save the environment. I hope they checked the areas for bats, as wind turbines can have unfortunate effects on these delicate creatures due to the air pressure changes they create; causes bats to haemorrhage. Nearly everything humankind does has some sort of adverse impact on another species, even if we think we’re doing right; wind turbines can screw with bats and birds, tidal power with whales and dolphins. It’s a bit depressing really however I guess it’s a case of choosing the lesser of evils; got to be better than fossil fuelled power-stations. 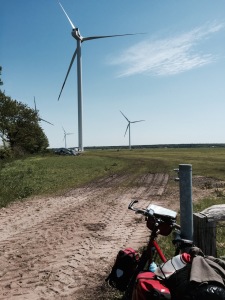 Pedalling past lots of wind turbines

I reached the 60km mark and noticed my front tyre was going flat. This was slightly vexing, but on such a fine day it was going to take a lot to annoy me. And besides, I was able to stop next to the village bakery/ice-cream shop so it wasn’t all bad. 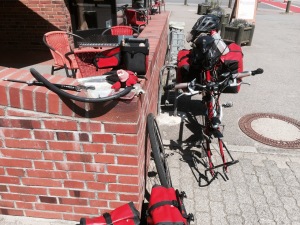 On examining the inner tube the last patch had come loose, maybe due to a combination of hot weather and friction. I tried to patch it but it wouldn’t take for some reason; I might’ve rushed it. I stopped for an ice-cream break to consider my next course of action. 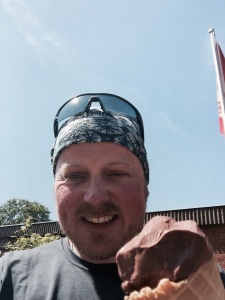 Whilst mulling things over, and trying to keep Lobster away from MY ice-cream, a friendly local pointed me in the direction of a bike shop a few hundred metres down the road. Great I thought, I can just get a new inner tube. Unfortunately they didn’t have an inner tube in the right size, which is an issue I’ve previously had on this tour, however I dug out an old one I’d repaired from my panniers and put that on instead. It’s still going over 100m later so the repair job seems to have been a good one, touch wood. I’ll definitely be buying a few spares in Hamburg.

After a protracted break I got back to it and rode to the Nord Ostee Kanal, which I had to cross via a car ferry; only a short jaunt across the canal.

Transport across the Nord Ostsee Kanal

Smaug on board the ferry

Crossing the Kanal – superb weather for it

I still had quite a way to go to get down to Bad Bramstedt, so after the canal tried to speed up a bit, making good progress, aside from on the cobbled bits. 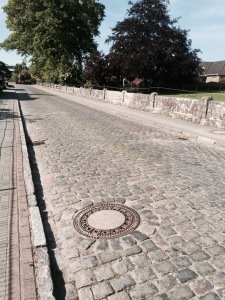 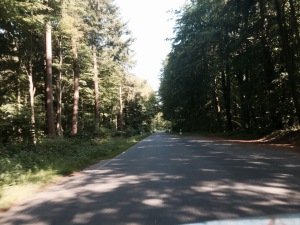 I arrived at Campingplatz Rolande in Bad Bramstedt a little later than anticipated, but reception was still open; I think the owner lives on site as he was wandering about doing stuff for most of the evening, including trying to speak to me in German which whilst appreciated wasn’t very successful as far as a two-way conversation goes.

The Campingplatz Rolande is a little small and quite noisy, but did the job for me after a fairly long and hot day in the saddle. The owner was able to supply me with a couple of cold beers which went down a treat. 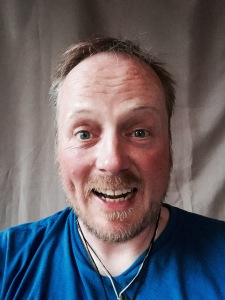 Cold beer always brings a smile to my face

I passed quite a lot of other cycle tourers today, including one guy looking very relaxed on a recumbent. I noticed a lot of them seemed to be around retirement age, or older. I guess people have more time on their hands for touring once they’re retired, however I wonder if this was just today’s sample or if the trend will continue; great to see people travelling by bike well into their sixties and possibly seventies though.

I spent the rest of the evening trying to decide what to do next, settling on a short leg tomorrow to a campsite just on the outskirts of Hamburg, followed by a hostel for one night on Sunday. This will allow me to see a bit of the city, whilst not getting trapped there for too long, and it’ll save on money too; hostels are expensive on Saturday nights. It’ll also give me a chance to do some laundry! I need to think about getting Smaug serviced, as I’m pretty sure he’ll need a new chain soon, and maybe a new rear cassette, and the stand needs tightening; don’t have the right allen key and too wobbly to use at present.

Top tip: If there a flying bugs in your tent, and I had quite a lot mine, shine your torch into the porch area to lure them out, then shut the door quickly; worked well for me. 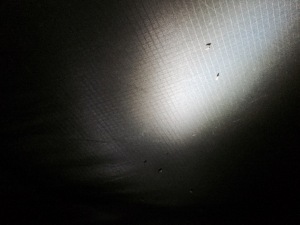 Luring the bugs out of my tent via head torch

I had a rather broken night’s sleep, partly due to passing traffic which proved pretty noisy, but also due to the massive thunderstorm that struck about 03.00. I didn’t get out of my tent to watch, as I could quite happily see the lightning flashing from inside, followed by thunder and heavy rain. Thankfully I stayed dry again, and it probably explained all the thunder flies around earlier.

Today’s ride was just a short 38km down to the outskirts of Hamburg, which only took around 2 and half hours, at a pretty slow pace. Here’s a link to the route and stats:

Not a lot to report from the ride. I did go around some road closed signs at one point, and just carried on to the next bit; they were resurfacing, but no-one was working on Saturday, and it was fine to cross the short stretch by bike. 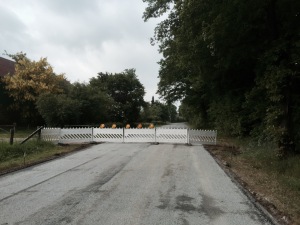 Road closed – thou shalt not pass, unless you’re on a bike

I made it down to the Knaus Campingpark in Hamburg just before midday, and checked in. To my surprise there was another cycle tourer with a Hilleburg Akto Tent right next to my spot. Yannick is from Belgium and currently touring up to Norway. It as great to meet up and chat about routes, bikes and share a few stories. 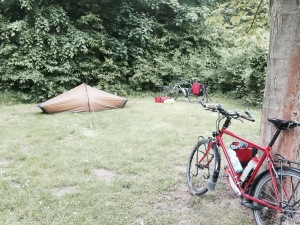 Another tourer with a Hilleburg Akto

As the day progressed 3 more cycle tourers turned up, however I’ve only spoken to them briefly so far as I’ve been busy doing laundry, and a bit of bike cleaning/maintenance. One couple are on their way up to Sweden for some island hopping, so we shared a few route suggestions. 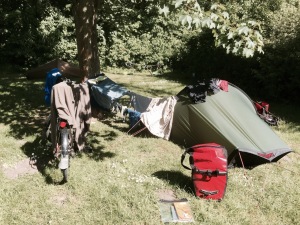 I’ve also discovered that, at least so far, MasterCard isn’t so widely accepted in Germany. This proved a problem whilst trying to get supplies in an Aldi earlier. I ended up having to take some cash out on my debit card, which’ll cost a lot more than using my Prepaid Travel card; something I’ll have to prepare for in Germany, however I reckon l be able to use it more easily in the centre of Hamburg.

That’s all for today. Blog now up-to-date. Tomorrow I head into Hamburg for some sightseeing, but also to visit a bike shop or two to top-up on inner tubes and get a couple of things fixed.