From the Arctic tundra of northern Norway, to hot arid climes of Spain, and the varied landscapes of Eastern Europe, I came across a variety of flora and fauna as I pedalled my way around Europe this summer. Whilst some of the animals were too quick to be photographed, such as the Black Woodpecker I saw in France, or just to fast as was the case with the hares in Sweden, I did manage to capture a few on camera; mostly dogs and cats as they tended to make their presence known, whilst in search of fuss or food.

In the far North there wasn’t initially a lot to be seen, aside from a few friendly trolls lurking around Nordkapp.

Lobster making friends with a Troll in Nordkapp

There were quite a few of them about

And some stuffed sea birds in the visitor centre

On the road South to Honningsvag I was pleased to see reindeer, but reminded of Scandinavia’s penchant for hunting at the hostel where I was staying.

Reindeer on the move near Nordkapp

I came across more reindeer and a couple of living  moose on my way to Finland and Sweden, and was constantly accompanied by the sounds of birds singing, as the snow thawed and Spring arrived.

A rather blurry picture of the only Moose I came across

Reindeer in the sunshine near Kautokeino

I was of course always accompanied by an animal of sorts, Travelling Lobster, and I shouldn’t forget that I am also classified as part of the Animal Kingdom. I couldn’t have done without my ‘jovial’ companion, even if he wasn’t one for doing much pedalling. 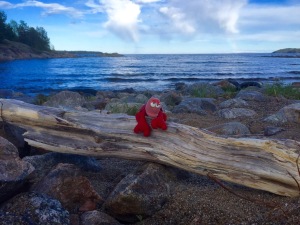 The Lobster had a fondness for cows. I’m really not sure why, however it could be to do with his addiction to chocolate, and realisation that cows are integral to its manufacture. It was he that ate all the chocolate I was forced to buy to feed this addiction…honest.

More cows in Germany, these ones were more relaxed

Cow by the roadside in Albania; this occurred a lot

Has anyone else found that some cows get quite excited when you cycle past them? I quite often found they’d follow me as I pedalled past their field, and that they’d sometimes break into a run to keep up. This happened to me a lot on my cycle tour in Scotland in 2013, and I’m wondering if it’s something to do with my red panniers.

More cows regarding me with suspicion in France

A lot more bulls in Spain, some of them huge

Cows trekking alongside lake Spain, was very tempted to go for a dip myself

As well as cows I encountered lots of goats on my way around Europe, more so in the South where herds sometimes blocked the road, and sometimes on campsites where they were used as environmentally friendly lawnmowers; don’t leave your washing out near them though.

A Danish Goat; I’ll find another table then

Goats and really big chickens in The Netherlands

Goats lounging in the shade by the roadside in Bulgaria

I was slightly nervous about passing this fine specimen in Languedoc, France

Birds were often to far away to get a good picture, or moving to quickly, however wildfowl proved more easier to photograph, especially when they wanted food.

This duck followed me around for ages in Denmark

Swans and cygnets on a canal near the Loire in France

Storks roosting in Spain; I passed many elevated nests on my journey

I lost count of the number of birds of prey I spotted, ranging from huge numbers of buzzards, to Black Kites, massive eagles where I couldn’t be definite on the species, countless Kestrels, and soaring falcons. They were often being mobbed by gangs of crows intent of driving them off; crows a long with pigeons were a constant feature around Europe. Birds of prey weren’t the most lethal of feathered friend I came across, although thankfully I only saw a sign warning of the dangers of the following.

Pretty sure flying sheep don’t count as birds, but a worrying development nonetheless

Yep, sheep, I really hope they don’t evolve wings, no one would be safe. I encountered many sheep ambushes on my tour around the coast of Britain in 2013, and became convinced they were after me and possess some kind of hive intelligence, with a grand conspiracy in play. I came across many more sheep in Europe, however they weren’t quite as vicious as their British cousins.

Sheep kicking up a dust cloud in Andalucia, Spain

Sheep in Olive grove in Extremadura, Spain; that was a very hot day

Sheep on the road in Albania

More Albanian sheep – they get to keep their tails here

Sheep safely corralled, for once, in Hungary

On the dangerous animal front there isn’t much to report. The only bears I saw were on signs, stuffed, or statues thereof, and although I visited a wolf sanctuary I didn’t see any as they were all asleep.

Most damaging animal encountered; vole varmints in Sweden that put holes in my tent

There’s a snake in this picture, also from Sweden

More wolves, these were statues too but made me look wonder for a bit, in Italy

I guess the most alarming animals of the whole trip were the dogs encountered in Greece, Turkey and Eastern Europe in general. Often wild or feral, they would chase me, snarling and barking. My scariest experience of the whole tour was being surrounded by a pack of 7 or 8 growling feral dogs in the hills outside Thessaloniki. On the flip side I came across a lot of friendly hounds, who were more than happy to say hello and stick their noses in my panniers looking for snacks.

Met Dimitri and his owner Fredy in Sweden, on their way to Nordkapp to start their own tour

Oscar the friendly campsite dog in France, near Bordeaux

There were a lot of highly styled dogs in Barcelona

Met this fine fellow at the top of a mountain pass in Greece, at a bar serving cold beer thankfully

Mother and son, at a Greek petrol station

Me and a new friend in Edessa, Greece; he followed me into town

My friend from Odessa again; look at that expression!

The one friendly dog in Thessaloniki

This chap decided to bed down with me at a deserted campsite in Bulgaria, very friendly and tried to follow me the next day 😦

Cats were also a common feature along the way, especially further South. They’d often arrive to inspect my tent and panniers, or to just say hello and settle down beside me in the sunshine.

Not a cat, but Lobster hiding from a cat in France

Cat lounging in a sunny spot near Seville

Thirsty Serbian cat next to the Danube

Horse drawn vehicles became more common in parts of Eastern Europe, however I happened upon many equine beasts elsewhere.

Ponies in The Netherlands

Carriage being drawn by shire horses (or equivalent) in Belgium

Donkey working in Albania; it was running away from its owner

Lady with laden donkey in Albania

Not quite a donkey, a Llama instead, in Germany

On the farm animal front, I met a few when staying with friends on their farm in the Ardeche, a wonderful break on my tour that I’ll always remember.

That was one big pig; she escaped once, running amok in the vegetable patch

The hog, now bacon and other assorted products I believe

Chicken having a peekaboo

Who didn’t want to get out of the river

And then there were a few exotic or miscellaneous beasts, or imaginary creatures, that I came across.

Moth in the mirror

Why anyone thought pink sheep statues were a good idea I don’t know, crazy Germans

Elephant at the Elephant climbing area near Fountainbleau

Me and Lobster hanging out in my hammock, very exotic

Not exotic but a lovely sight on my return to England, the countryside and a field of cows

Finally here are a couple of nice landscape shots, although really I could do a whole series of blog posts just show-casing some of the amazing panoramas I pedalled past.

Poppies in France, not far from Paris 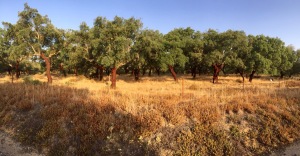 Spain also had some stunning countryside

All these pictures were taken using the camera on my iPhone 6. I considered taking my Canon digital SLR, however it’s just another piece of baggage and thing that I could potentially lose or get stolen, so decided against it in the end; good decision I think.

Still thinking about ideas for my next cycle tour adventure; likely to be a series of shorter expeditions I suspect, to fit around work, but looking forward to whatever they will be next year – for starters mountain biking around some bothies in Scotland has got to be a good plan.