A fairly brief update from today’s ride, mainly due to the fact it was dominated by one thing, the wind, which isn’t that interesting. I still managed to cover about 110km in 7 hours and 20 minutes of pedalling (slow); here’s the link to my route and stats:

You’ll notice a few of those kilometres were on the ferry from Tars to Spodsbjerg, providing a welcome respite from the elements!

I slept well at Ore Sound camping, just outside Vordingborg, despite the wind in the trees making a racket all night; still, makes me feel cosy in my tent. 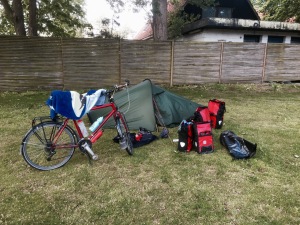 I was on the road in good time, and pedalled back into Vordingborg to a bike shop I’d passed yesterday to buy some more puncture repair glue; can’t be too careful, and I figured if I bought some I’d hopefully not need it, as opposed to not buying some and then immediately getting a puncture. 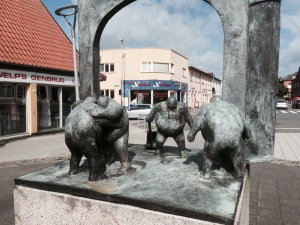 Strange statues in Vordingborg, not sure what this one is about? Vaguely Lovecraftian

With the wind swirling about, but mostly being a strong westerly, I rode over the first bridge to the island of Falster. This is where I discovered it’s even more windy on exposed bridges, however at least it wasn’t raining.

it was only a short leg over Falster, followed by a small bridge over to Guldborg on Lolland, a slightly bigger island.

I stopped in the square in Maribo, where there was a small market going on, and had a break; Haribo in Maribo, plus bananas of course. 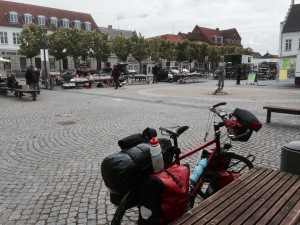 Break in Maribo – market on 2

After recovering a bit I rode on via a marked cycle route, when it didn’t divert me miles off course, down to Tars.

This was a really tough section of the ride, and very tiring. The wind, as well as making riding difficult, is a constant noise in your ears blocking out any other sound, so it’s hard to take anything else in. All you end up focusing on in a strong headwind is keeping going, and making another kilometre.

I did however notice my left hand pedal start to squeak. This isn’t anything particularly out of the ordinary, random squeaks start and stop quite often whilst cycling, however coupled with the harsh conditions it added to my annoyance, and resulted in some choice words being vocalised in a loud fashion; no-one else around to hear luckily, aside from some slightly startled crows looking for shoes.

I just made the ferry over to Spodsbjerg on Langeland, with about 3 minutes to spare, and had a nice break on the 10km crossing; think it was about 10km anyway. 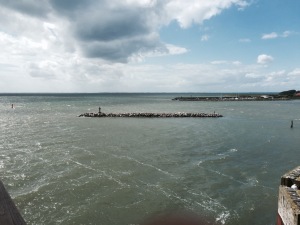 Made the ferry, on my way to Langeland

I indulged in a hotdog and Fanta, topping up my energy reserves and morale. It was quite a rough crossing, with a few waves breaking over the bow and soaking one unfortunate passenger; I must admit I laughed this. I was mostly hoping my bike didn’t get tossed about too badly, as even though I’d tied Smaug down there were a few big hits.

Happy to be on board and out of the wind

Fanta break – was yearning for a fizzy drink

Smaug survived the crossing – tied down

After the ferry I pedalled over Langeland quite quickly, following a marked cycle route for the most part, before taking on the next challenge; a set of two bridges over to Tasinge.

Cosy cycle path to next bridge

The first bridge was quite high, and very exposed. I ended up walking my bike over some of it as the cross wind was just to strong to go in a straight line. I made up a marching song about Denmark and strong wind which I’d better repeat right now, but it might come out in the pub at some point.

After the mini island of Sia the second bridge was flatter and more manageable, but it was a relief to get over to Tasinge. 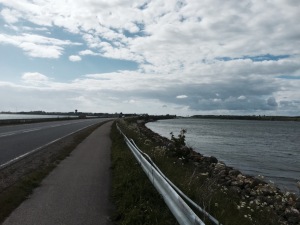 I passed a few cycle tourers going the other way as I approached my destination for the night, with smiles and waves giving me a much-needed boost. I’m not sure where they were going to stop for the night, but if they were camping on one of the smaller islands they were in for a rough night.

I ended up stopping just prior to the bridge over to Svendborg, turning off to a campsite near Vindeby; Svendborg Sund Camping. As with many of my camping stops I’d found this site using the ACSI app on my phone, which is proving very useful. 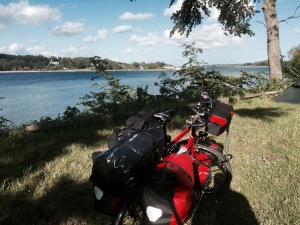 Svendborg Sund is a lovely campsite, and the owner was very welcoming, pointing me in the direction of a picturesque and sheltered place to pitch my tent.

I bought a couple of recovery beers from the campsite shop, then set up, had a hot shower, and felt a lot better. I felt a sense of accomplishment at having overcome the headwind to manage a respectable distance for the day. 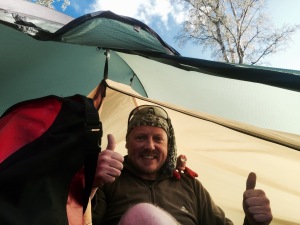 Double thumbs up after a hard day’s ride

It was nice to settle down in the common room for the evening, and plan the next day’s ride. Just down the hill I watched a young man setting up quite a display which he later used to propose to his girlfriend; there was a small pavilion tent, a rose lined carpet to it, candles and all sorts going on. I didn’t take a photo as didn’t want to interrupt; he already looked very nervous. Hope he got a good result!

Office set up for the evening

Excited about tomorrow; wind is supposed to drop, and pedalling out of Denmark to Flensburg in Germany, so last night in Scandinavia. Really feel like I’m making progress now, and looking forward to the next few weeks.