Recently I’ve been pondering the terms ‘growth’, and ‘progress’, when they’re used to describe our aspirations as a race, in the developed ‘Western’ world anyway. It’s weird how we seem to think of progress and growth as building more, and consuming more of our finite resources. Is that really progress? It doesn’t seem to make that many people more content with their lot, or healthier, mentally or physically. If anything it just seems to create more problems.

We always have to pursue economic growth, but surely infinite economic growth is impossible when you have finite resources, and an economy that is based on using them. I think a different model is needed if we’re to really progress and grow as a species.

I’ll write a more structured blog on this in the near future. I might include some thoughts on the new Norwich Northern Distributor road, which as far as I can tell is just there to open up the countryside to more development, more ‘growth’. It’ll mean the closure of at least two of the roads I cycle down to get to and from work, which will no doubt mean more traffic channelled on to fewer roads, with more drivers getting annoyed with ‘bloody cyclists’. I’ve tried to find out some more information about new cycle paths the council might have planned to help cyclists get into Norwich safely, but haven’t found anything concrete yet. I fear I may have to pedal a slightly longer and more congested route, but will reserve judgement pending further investigations.

Rather than saying any more on the subject now, I thought I’d share a few photos from my January cycling, either from the commute, or the occasional excursion in search of pie and cake. A lot of people seem reluctant to get out during the winter months, however with the right kit it’s absolutely fine, and often more peaceful on the quieter roads. One just has to stay alert for any icy patches; might have done a couple of inadvertent stunts recently.

New route to work past lots of farmland

It’s great seeing the countryside change throughout the year. The tree branches are bare at the moment, but will soon start to bud, shutting away secrets that are currently in plain site.

Looking over Whittlingham Broad towards the church in Thorpe St Andrew

Frosty morning down by the Broad

Nearly ended up in the ditch, tad icy

Bare trees will soon be in bud

And it’s time for snowdrops to appear in abundance. Lots of them on my route to work. I’m looking forward to seeing the bluebells once Spring arrives.

Snowdrops awakening for the day

I pedalled home from work illuminated by the light from the blue super-moon the other day, an impressive site. My new camera phone took surprisingly good pics of it; I can use one of these for a cover on one of my short stories.

I’ve set a target of 5,000 miles (8,000km) cycling this year, which should be possible seeing as I regularly pedal 100 miles a week just on the commute. I’ll probably go for another tour in the summer or autumn for a couple of weeks, perhaps heading up to Derbyshire and over to Wales; route to be confirmed, maybe Europe instead. In the meantime I’ve been getting out at the weekend a bit, most recently up to Holt to grab a pasty and cake from Byfords. Bywords is a must visit for any hungry cyclist in the area.

My route from Salhouse across to Holt was on very quiet country roads, taking in the now closed RAF Coltishall, somewhere I don’t think I’ve been since I was a few months old (felt quite weird). It has rained an awful lot recently, meaning many of the roads have large puddles, or lakes as was the case below. I took the plunge and managed to forge through to the other side, about 30 metres away, without sinking into a pothole. 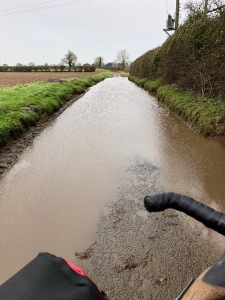 Just how far does the ‘puddle’ go on for?

I think I might have to create an album of the churches I pass whilst out on my bike. I’m not particularly religious, but do like churches; their architecture and the often peaceful atmosphere surrounding them is attractive. These two are close to where I live, although there are dozens more, a legacy of Norfolk’s rich farming past and all the landowners competing via the medium of church building.

To close, here are a few cartoons I came across recently and thought were spot on, courtesy of @cartoonralph (you can follow them on Twitter). I think they accurately portray how disconnected we’ve become from nature, when we should be part of it, not set ourselves aside or above (there’s a blog to be done on deep ecology at some point too). The centre of the universe one is too true when it comes to our sense of entitlement as a race.

A handy guide for humanity

People and nature in Venn diagrams

Somewhere above the Earth

Enjoy the winter months and keep on pedalling!